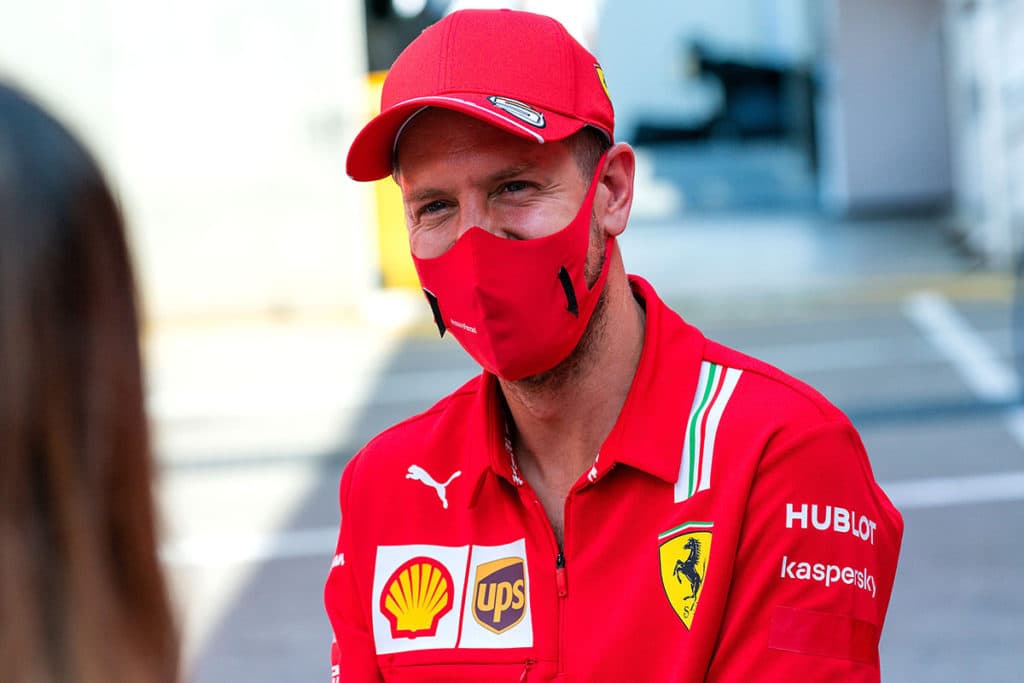 Sebastian Vettel will drive his last race for Ferrari this weekend. In advance, we have spoken to him exclusively.

Mr. Vettel, as a journalist you should always be objective. Nevertheless, I admit that I cheered for the first time in a very long time when you crossed the finish line in Turkey. Because I was pleased to see you getting the third place.
Sebastian Vettel (33): (laughs) Thank you, I felt the same.

In contrast to the general public, you have always trusted in your abilities. Now this weekend your Ferrari era is coming to an end. Basically: What value does the word “trust” play in your life?
Subconsciously, trust is very much in the foreground because it has a great significance for all of us. It stands for team spirit, truth, correctness.

Are there people you trust in the “shark pool of Formula 1”?
Yes, there are. There are good sharks and bad sharks (laughs). Seriously: There are still human beings working in Formula 1 and there are people you appreciate and listen to.

How important is trust within your own team.
Extremely important. Because you want to achieve something together and don’t want to stand alone. That’s why trust is the basic foodstuff. The opposite would be mistrust. And then the path you want to take together would be very, very far away. And since Formula 1, which is literally a fast-moving race, is not about days, hours or minutes, but about hundredths of a second, that goes without saying.

When you switched to Ferrari in 2015, you seemed downright euphoric about the trust you placed in Ferrari. You were really keen to follow in the footsteps of your role model Michael Schumacher. How sobering now is the realization that you did not succeed?
(Vettel thinks for a long time): Of course, at first you are disappointed because you couldn’t achieve the goal you set for yourself. But in the end you have only two ways to deal with it: Either you break down or you come back stronger. The first option is out of the question for me. I always look ahead and firmly believe that somehow it will always go on. And that somehow is decisive. Sometimes you cannot change things that are influenced from the outside. But the decisive thing is how you deal with them.

Nevertheless: The last two years, at least that was the impression, the initial euphoria has disappeared. You put it differently: “It is no longer a love relationship.” A person who, like you, places such great importance on emotional constancy must have been particularly affected by the realization that there is no such thing as love for a lifetime in Formula 1…
There are many explanations for this. The bottom line is that it’s all about success, about achieving the goals you set yourself. The first years were also promising, the last years then no more. Even though everyone put their whole heart into it. In the end, it didn’t work out for various reasons. We missed the goals we had set ourselves. And then, logically, the initial euphoria diminishes.

Jean Todt explained the successes he celebrated together with Michael Schumacher at Ferrari in exactly the opposite way. The many setbacks they had, strengthened the cohesion, increased the confidence and in the end led to this great strength. Wouldn’t you liked to have experienced this in your time as well?
I think in principle it was the same in the beginning. But then you realized that it no longer fits together. But you shouldn’t see that too negatively, because for me it’s rather normal. It’s important that all parties look forward positively and individually. Of course, in retrospect one would have wished for some things to be different. But I do not regret anything. It is important to finish the remaining common tasks together with decency.

Vettel explains his problem at the wheel of the Ferrari

A Formula 1 driver is more dependent on his tools than most other athletes. In your case from the car. And that’s where you’ve been fundamentally lacking confidence this year.
Trust in the car is of course extremely important to us. As mentioned at the beginning, we’re talking about hundredths of a second. If your car doesn’t feel completely right, you don’t stand a chance in this close competition. Then you hesitate here, give away a tenth there. All in all, you are then in a lost position when it comes to attacking at the top. In the end, even small things make the difference.

In your glorious Red Bull days, you had blind faith in your car. You could play with it. Why couldn’t you do that with the Ferrari?
That’s a complex issue. The handling of a car changes virtually every lap, and so does the behavior of the tires. Basically you can say: If you know your car, if you trust it, you know beforehand what it will do. Then you drive instinctively and automatically do the right thing. But if you have doubts and have to think too much beforehand, you lose the crucial time. With the Ferrari, unfortunately, that’s the same with me. But the car doesn’t have a special problem, it’s the sum of little things. In qualifying, that’s for sure, I was further away from the limit of the car than in the races.

You had to take some criticism for that. Did that diminish your confidence in yourself, your confidence in your abilities?
When you are self-critical, you always have doubts. But I haven’t forgotten how to drive, I’m much more likely to analyze what the reason is that I haven’t been able to use my skills one hundred percent. As I said: I am my biggest critic myself. I know: On and off the track I could have done things differently. It’s also about priorities that you might have set wrong. Or human-related topics. But by reflecting on this, you develop and become stronger.

In a tough duel at over 300 km/h you have to trust your opponents. Are there any differences?
I won’t answer that here. Because no matter what I say about myself: Some could always draw negative conclusions. But let’s put it this way: I never have any reservations about a tough duel with Lewis Hamilton.

What makes him so particularly trustworthy?
Experience from the past. He has a total overview of the action and is now not without reason a seven-time world champion.

2021 marks the beginning of a new chapter for you with Aston Martin. Why do you trust this project to be a success?
It’s less a matter of trust. It’s more a matter of curiosity and the joy of new things. I am extremely excited about the project and look forward to it. There is a lot of positive energy in the term curiosity. And you can rely on it just as much as on a completely different objective to move the team forward. I’m relying on my experience and on what I can achieve behind the wheel. My time at Ferrari has also left its mark on me, I have learned a lot, developed further and am now at a different level than before – on and off the track. But I don’t expect any guarantees of success in the future, I expect a lot of hard work.

Aston Martin also places a lot of trust in you, having even separated from Sergio Perez for you: How can you repay this?
With my experience, a clear view. By taking advantage of the spirit of optimism in the team, not rushing into things and trying to get closer to success step by step. Realistically, Mercedes will remain the big favorite in 2021. We have to look to ourselves.

People also trust their heroes. Otherwise they would not be heroes. Why did you trust Michael Schumacher so much in your youth?
Because he was able to drive the red car faster than anybody else and always got the maximum in every race. He was still able to call up extra power like I’ve never seen anyone else do. Then and now. And that over many years. In sporting terms, this stands for extreme reliability. He later confirmed that as a person after I got to know him. He always stood by what he said.

You also trusted him as a mentor. In the meantime, his son Mick drives in Formula 1.
Yeah, and now the roles are more or less reversed (laughs). For Mick, I’m what Michael was to me. Mick is a great boy. And yes, I try to help him whenever I can. Everybody has to find his own way. Mick can drive by himself anyway, so I don’t have to give him any more tips. It’s more about other things – besides the race track. And just as Michael gave me advivce when I wanted to hear it, I will do the same when Mick asks me.

As a father, you have to give trust and convey values. Have these things gotten worse for you since you became a father?
In theory, everything is always nice. The most important thing is the practice. You have to set the right example for your children.