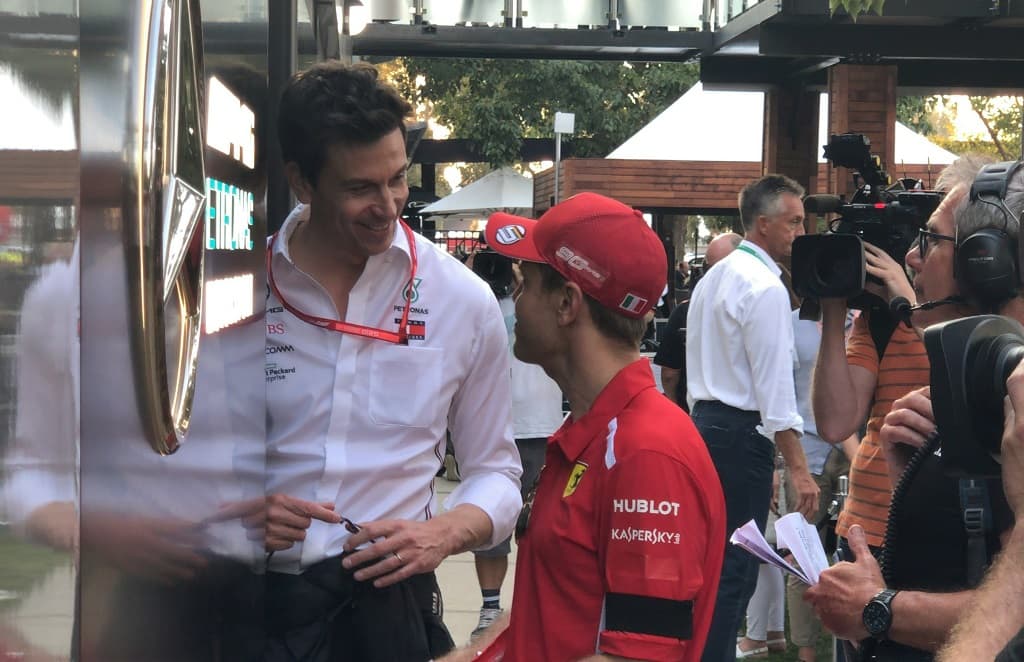 Will there be a sensational exchange in Formula 1? According to Mercedes boss Toto Wolff, Vettel and Hamilton could change teams one day.

Like it was meant to be: While Lewis Hamilton signed a fan’s red Ferrari shirt at the entrance to the Mercedes Motorhome, his boss Toto Wolf was talking to journalists and about the possibility of Hamilton changing teams one day – and not to any team!

Hamilton’s Mercedes contract runs out in 2020. It is not a secret that Hamilton is a big fan of the brand with the prancing horse. A title in red would be the icing on the cake of his career. Wolff knows that only too well:

“It’s on every driver’s mind to someday drive for Ferrari,” said the Austrian in an interview during the Spanish GP weekend.

“That’s the most iconic and historic brand of Formula 1. That’s why I totally respect it when a driver wants to race for Ferrari one day.”

“We have even discussed this matter within the team with Lewis when we negotiated the last contract. I think you have to be open-minded and have an understanding that drivers also check out other options. However, what I consider to be our strength is that we have always been very transparent with one another.” Wolff emphasized.

“At the moment, our relationship is great. We give Lewis a car with which he can achieve his goals. If we continue to do so, there is no reason to go elsewhere. And if one day our ways separate, then on very good terms – and everyone will succeed with a different set-up.” Wolf added.

Should Hamilton clear the way, a driver exchange between Hamilton-Vettel is a realistic option. Vettel’s Ferrari contract expires around the same time as Hamiltons – in late 2020. If Vettel still hasn’t won the title with Ferrari by then, a change to Mercedes would make much sense – especially because a German would finally sit in a Silver Arrow again.

“Why not Sebastian?” Wolf openly asked the journalists standing by.

The counter question followed promptly: “Can you imagine him in a Mercedes?”

“Absolutely,” answered Wolff. “Bear in mind that there are six to seven drivers out there who have the speed and intelligence to sit in a world champion car. Two of them drive for us – preferably forever. And there are a few others that we like to watch. Sebastian is definitely one of them.”

F1 Insider - 7. May 2019 0
In a recent interview, Charles Leclerc criticized Ferrari's team order in favor of Sebastian Vettel. He sees it as his job "to...

Ralf Bach - 2. January 2020 0
Red Bull chief consultant Helmut Marko (76) is an exception in Formula 1. Although the lawyer is ruthlessly tough when it comes...