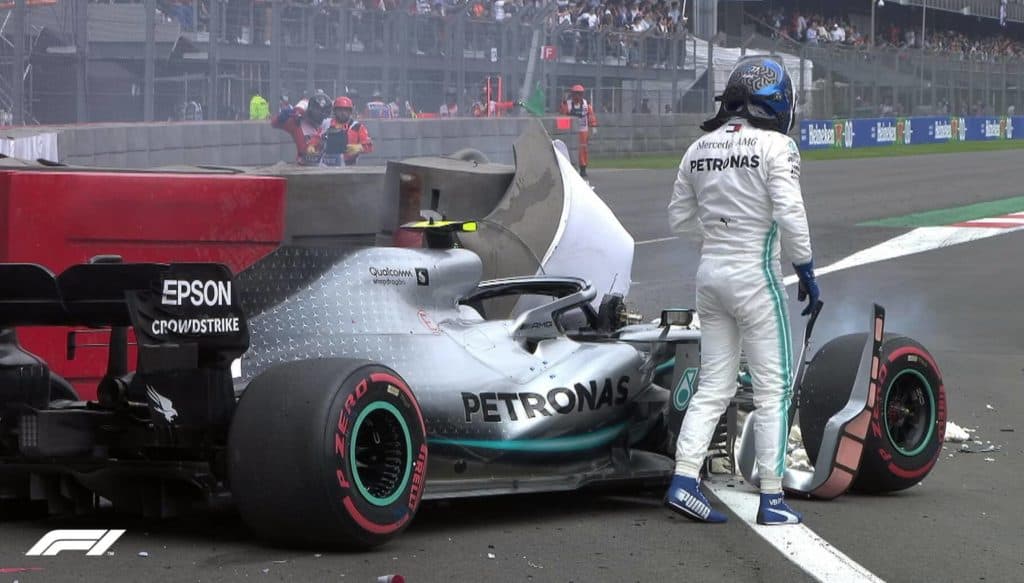 Bottas Out of Air?

Bottas crash left some breathless in the high altitudes of Mexico City.

A few meters from the finish line, Valtteri Bottas disassembled his silver arrow in the last corner of his final lap in qualifying at the Mexican Grand Prix.

The Finn came a bit too far out, lost grip and smashed into the wall. His car then hit the front of the tire pile with force. Immediately after the crash, Bottas radioed back that he was “Ok”, but his heavy breathing was for everyone to hear.

No wonder, the crash reached forces of 17g. Bottas had to go to the Medical Center and he later revealed:

“I dived too deep into this corner, the middle of the curve…produced too much understeer, the line went on and on, I could see how the left front wheel started to pick up dirt. Then I lost grip and slammed into the wall. The impact was fierce, but the really hard part was what came after: I slid along the wall, and at some point a series of TecPro barriers came into reach, and I crashed into them with full force. It was as if you were driving into a wall.”

“The last impact left me breathless, and it took a moment for my breathing to return to normal, and on impact, my knees collapsed, possibly injuring my nerve. Anyway, in the first few minutes, I had hardly any feeling in my right knee, but now everything is back to normal.”

But not all was well. The team, especially the mechanics were expected to put in a night shift. Mercedes later confirmed:

“The car is badly damaged. But I’m 90 percent sure that we can get him off without a disadvantage. The transmission didn’t get damaged at first glance. ”

Bottas should be able to start on Sunday in Mexico City.