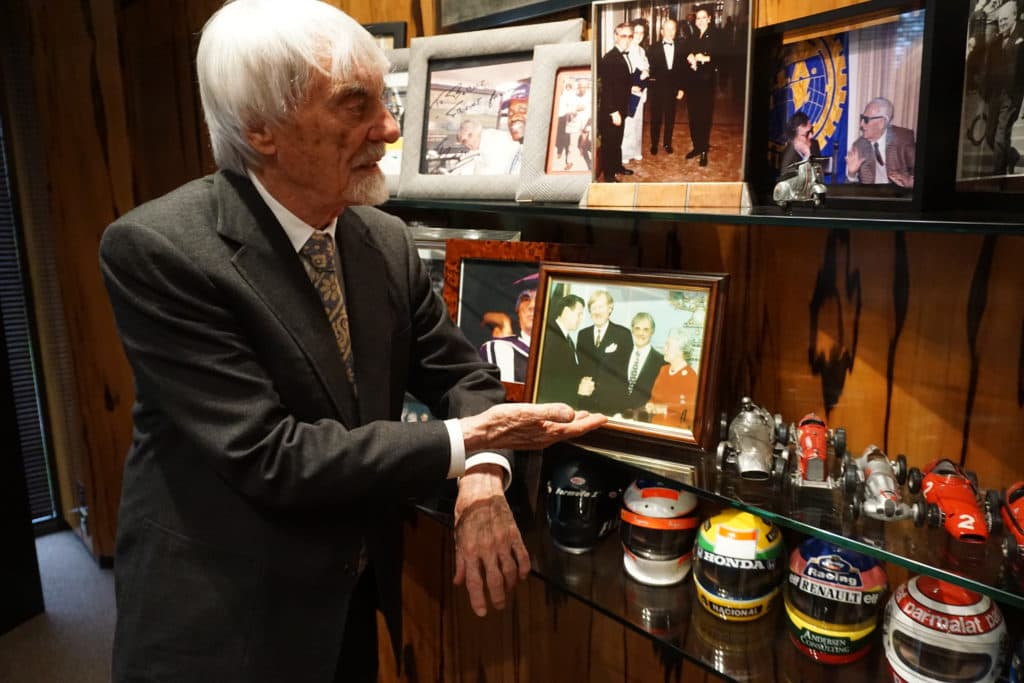 Continuation of Bernie Ecclestone’s greetings from Quarantine. The former Formula 1 chief marketer speaks on F1-Insider.com about Formula 1, Ferrari and Mercedes

Even in isolation Bernie Ecclestone (89) does not let go of his life’s work. Formula One, which he made one of the largest sporting events on the planet. He was closely following the events of the past few weeks. He has a clear opinion, but only expresses it when asked. “Crisis management in Australia did not work”, criticizes Ecclestone, “there was no orderly communication until the race was finally canceled. In principle, this has continued to this day for all those responsible.”

PART I OF BERNIE ECCLESTONE’S GREETINGS FROM QUARANTINE: THAT’S WHY HE PRAISES GERMAN POLITICIANS

What would he advise the new chiefs from Liberty Media? “They think they know what they’re doing”, says Ecclestone, “but Formula One has a European DNA. You can’t run it and its protagonists as if it were football or basketball.”

There is too much talk, but too little management. He gives an example: “I was often criticized because I spoke positively about dictatorships. But that was partly misunderstood or my British humor was taken at face value.” Ecclestone: “I didn’t mean that democracies should be abolished. Of course not. But I still believe that there have to be individuals who make decisions when it matters. You can see that during the Corona crisis more than ever. Democracy never worked in Formula One.”

The Briton gives the reason: “I felt like an emperor who constantly had to talk to princes who only thought of themselves. About their own profit. But not of the whole country. So I had to speak a word of power or scare them. Otherwise Formula 1 would never have worked that way.”

He would never have allowed a scandal like the private agreement between the automobile authority FIA and Ferrari. “What’s that supposed to mean?”, asks Ecclestone. “Either someone cheated or not. The FIA ​​statement sounded like Ferrari’s admission of guilt. Why else would they have accepted it? The other teams now have to stay tough or even go to court. There are several millions of prize money due to them.”

Ecclestone continued: “When McLaren was involved in the spy scandal in 2007, I didn’t let the process even begin. We subsequently disqualified McLaren and punished them with a hundred million dollars. The other teams logically moved up in the prize table. Everything was processed transparently.”

That it came to this today has to do with weak management. The Briton: “Ferrari team boss Mattia Binotto is a very good technician. You can see that from the fact that his engine was brilliant – for whatever reason. But is that why he is a good boss who should lead a team? I don’t think so. He always laughs nicely, regardless of whether the sun is shining or it is raining. Regardless of whether Ferrari wins or loses. That doesn’t exude sovereignty.”

But what does Ferrari’s weakness in leadership mean for his ex-backgammon mate Sebastian Vettel, who was always close to his heart because of his down-to-earthness?

“I think”, says Ecclestone, “that Sebastian’s performance has recently suffered under the Ferrari constellation with new teammate Charles Leclerc, who is also managed by the FIA ​​President’s son. I suspect he doesn’t see Binotto as the supporter he needs in his situation. Sebastian should therefore stop or look for alternatives for 2021. McLaren, then again with Mercedes engines, could be one.”

Because Ecclestone has a guess. “I’ve met Mercedes boss Ola Källenius when he was still in charge of Mercedes’ F1 engines factory in Brixworth. So he knows what it is about. At the moment, however, he has other problems than his Formula 1 project. But what I am deeply impressed by is how he is leading the company through the emissions scandal and the corona crisis into the future.”

Alone: ​​”If I were him”, Ecclestone puts himself into the position of the Swede, “I would sell my team at the end of 2020. What does Mercedes have to prove after six titles in a row? Nothing. Every world champion after that would have to live with the shortcoming only to have won the title because of the exit of Mercedes.”

On top, he mentions: “As far as I know, Mercedes team boss Toto Wolff has long decided to leave Mercedes and join forces with Lawrence Stroll to buy Aston Martin. The two have been traveling inseparably for two years like twins around the world. And you have to know about Toto: He was also one of the princes I mentioned, who only thought for themenselves and not their employers. Sure, he was successful, but would he have been so without the hybrid engines?”

Anyway, Ecclestone is certain of one thing: “Formula 1 will survive in whatever form. Despite the difficult times, the green zeitgeist, not only because of Corona.”

Mr. E.: “Because it’s bigger than individuals. Was it necessary to land on the moon? Did it feed the hungry? No, but mankind was still fascinated. People need heroes. Racing drivers, especially Formula 1 drivers, are in a way astronauts to which you look up with admiration. Ayrton Senna is the best example. He brought light and courage to life even to the poorest in Brazil in their dark tunnel of existence. At the moment this is needed here more than ever.”