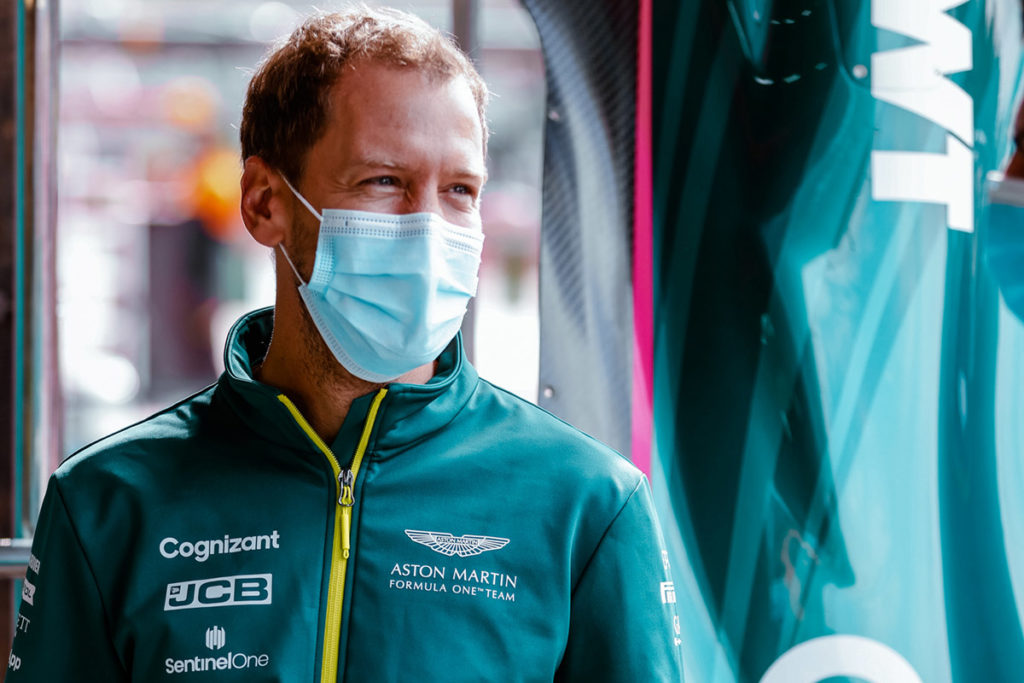 Sebastian Vettel supports the #BioBienenApfel campaign. A conversation about the contradiction between sustainability and Formula 1 that needs to be resolved.
Bianca Garloff | 25. April 2021 , 10:25 Uhr

Sebastian Vettel supports the #BioBienenApfel campaign. A conversation about the contradiction between sustainability and Formula 1 that needs to be resolved.

Mr. Vettel, you are involved in the BioBienenApfel campaign, which aims to help bees regain more habitat with free seed packets. It fitsthat you’re driving a green car in Formula 1, which you’ve also christened “Honey Ryder”. Why are you now braking specifically for bees?
Sebastian Vettel (33): Everyone knows how important the bee’s contribution is to the environment, to all our lives. It’s up to us to take care of them, to create more habitat for them. This can be done with a little seed, so that there are more flowers again, which the bees can pollinate in turn. The bee is definitely a good ambassador for each of us to raise our awareness. Because each of us can make our own small contribution to make the world a better place. The way we currently live is not sustainable – and that needs to get into people’s heads.

Not so long ago, you wanted to drive with loud and fuel-guzzling V12 engines. What led to your change of heart?
I still rave about V12 engines. The sound and the vibrations are unique. But I’m only talking as a romantic racing driver. But as a human being, I know that we can no longer be wasteful with our resources. There are probably people who are now pointing the finger at me and saying I’m hypocritical because I’m a Formula 1 driver. Because we race and because we travel to most places by plane. But racing is my profession and my passion. My point is that there are ways to make the whole Formula One business much more environmentally friendly and sustainable, too. It’s not about doing without things, but making them better and acting more responsibly. That you can live sustainably and still pursue your passion. I think questioning yourself over and over again is the beginning of that.

Was there a specific moment, an initial spark, that made you now act so openly as a role model for the protection of nature?
There was no specific moment, it was more of a process. There are socially relevant things that even sports can no longer close their eyes to. “Black Lives Matter” is one of them. So is environmental awareness for me. The topic of environmental protection is becoming more and more concrete. You can’t and mustn’t avoid it anymore. Am I a role model? I see myself more as an inspirer. If I lead other people to follow the same path, then that’s good.

What exactly is your path?
Firstly, that I find a way to reconcile my sport, my passion, with an awareness of sustainability and ecology. Sure, I’d rather go to the races by sailing ship, but then the others would leave without me (laughs). So it’s all about optimizing the necessary travel and making it more efficient. Because traveling around the globe leaves the biggest footprint. One thing is certain: Formula 1 in itself is not exactly the most climate-friendly sport. But there are approaches to questioning the calendar so that people don’t zigzag and save themselves unnecessary travel. Formula 1 can no longer hide from that. At the same time, we’re doing without plastic bottles in the paddock. We simply have to become more efficient. I can take care of meetings via video conferencing. And if I can, I travel by car or train. And then from the hotel to the race track by bike.

So Formula 1 has to take on a kind of pioneering role?
Yes, it has to take on a pioneering role, otherwise it will have a hard time in the future. After all, Formula 1 is known for having always brought innovations to the road that have helped us all. For example, today’s Formula 1 engines are the most efficient powertrains there are. But also in terms of safety: ABS, traction control – these are all things that were developed in racing and then went into production. The hunger that engineers have to be better in the face of tough competition by coming up with innovative and fast solutions is still very strong. If you channel this hunger in the right direction, the general public will also continue to benefit. That’s the point of contention at the moment, that the engine is very efficient but won’t find its way into series production because it’s too expensive and too complex. So we have to think of new and different ways and the people in charge have to face this challenge so that the series remains relevant in the medium and long term.

After all, the FIA is planning to use biofuel in Formula 1 from 2025. Would you be in favor of that?
Absolutely. And it has to be 100 percent biofuel. At the same time, you have to ask how the synthetic fuel will be produced. Basically, e-fuels are absolutely the right approach. 2025 is still a long way off, and the new engine has not yet been formulated. But until then, other things can be addressed.

How do you live biologically at home?
At home, I switched electricity providers a few years ago that could supply me with renewable energy. I’m happy to pay a little more for that. On my roof I have a solar system, try to produce a little bit of my own electricity. I’ve also become more conscious about what I eat. What do I eat? Where does what come from? I always ask myself that question now. You also don’t have to eat meat every day anymore. And when you eat meat, quality and origin make a big difference. Or the waste with plastic. I deal with all these issues very, very consciously. And I try to set a good example to inspire others.

So you also plants your own beds at home in the garden?
Yes. It’s fun when you then see things growing, it blossoms and the odd bee comes by. Your own tomatoes definitely taste more like tomatoes than the ones off the shelf.

And you’ve also planted your own flowers for the bees….
Not only for the bees. I staked out a flower heart a little bigger than normal. In the beginning my daughters helped me, but then suddenly I was on my own with the spade. It was more work than I thought. But in the end, you’re happy when it really blossoms.

You even did an internship at the organic farm?
Let’s say a taster course. I just wanted to see it and feel it and also lent a hand. I came to the idea of going to an organic farm through nutrition. About what to eat to eat healthier. I started asking myself questions about how to squeeze more performance out of my body. Then I took a chance to just stick my nose in.

So you got up at four to milk the cows?
It was enough to get up at five. The cows were on at six (laughs).

Your new consciousness also includes thinking of others. That is the opposite of egoism. A Formula 1 driver, however, is the ego corporation made flesh. He must think only of himself, he must be better and faster than others. Isn’t that a contradiction?
No, not for me. I see it more as an opportunity and don’t try to convert people. The future concerns us all. But when I put on my helmet, I still want to be faster than the others. Otherwise I couldn’t and wouldn’t do the job anymore. Otherwise, there would be no reason to close the visor anymore. My job and my passion are still racing. And after so many years, I also know what it takes to set the right priorities. I’ve always been the type of person who, when I tackle something, wants to do it right. But I’m only talking about the time when I’m actively practicing my sport. We have to be clear that in the end, nature is the most important thing of all.