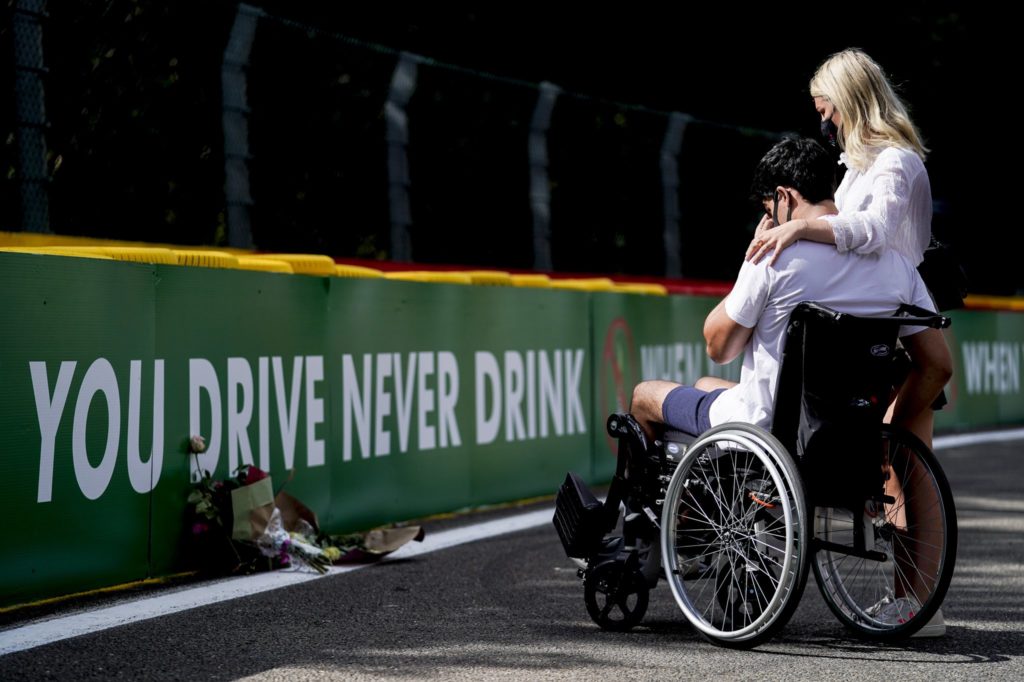 Juan Manuel Correa is making his Formula 3 comeback in Barcelona two years after his serious accident at Spa. We spoke to him.
F1 Insider | 05. May 2021 , 17:37 Uhr

Juan Manuel Correa is making his Formula 3 comeback in Barcelona two years after his serious accident at Spa. We spoke to him.

It has been two years since Juan Manuel Correa collided with Anthoine Hubert in the Formula 2 race at Spa. The accident had tragic consequences: Hubert died in the crash, Correa was seriously injured. But now he is daring to make a comeback. This weekend he will compete in Formula 3 in Barcelona – against David Schumacher, among others. We spoke to the U.S. boy in advance about the accident and his return to the racetrack.

Mr. Correa, a year and a half after the terrible accident at Spa, you’re returning to race in Formula 3 in 2021. How does it feel to be back in the car?
Juan Manuel Correa (21): It’s great to be back to the life of a racing driver. A bit surreal, because for me it always seemed such a distant goal to be able to get back into a race car. There were so many question marks. The biggest one: with my injuries, am I physically fit enough to be able to accelerate and brake? To see that I can look for the limit again is one of the best feelings I’ve ever had.

The last year and a half has been one of the toughest challenges I’ve ever faced. Now to have climbed this mountain makes me proud. But my challenge doesn’t end when I’m back in a race car, it will end when I make it to Formula 1.

How much are you still impaired?
I will have handicaps all my life because I have irreparable damage to my legs. My right ankle in particular is destroyed, which is why I only have limited mobility there – and that won’t get any better, in fact it will probably get worse over time. But fortunately I’m fit enough to be able to step on the gas again. I can only move my right foot slightly, but it’s enough for the gas pedal. However, I can’t yet apply the brake pressure that I would like to. That’s why I’m still losing some lap time. But I believe that with a little practice I’ll get these things right.

Correa: “In the beginning, my life was hanging by a thread.”

What were the toughest moments during the rehab phase?
The first few months. At the beginning, my life was hanging by a thread. For a while it really looked like I might die – because of my lungs, but also because of my legs. Saving the right leg was very risky. One doctor thought it would be better to amputate it. Still, the hardest moment was when I got back to Miami – back to normal life, that is.

In the hospital, you’re in your own bubble. But then when you’re thrown back into real life and have to learn to deal with your limitations, it’s tough. It took me a few months to get out of that hole and find the motivation to work on my comeback.

How many surgeries have you had?
I had two vertebral fractures, T6 and T7. My organs were also damaged: my heart was full of water, my liver was hurt, my lungs collapsed four days after the accident. I then went into a coma for weeks. My legs were also badly damaged, of course. On the left, the doctors inserted a titanium plate the day after my accident. It’s not at 100 percent yet, but it’s okay. But the right leg was the one that was really hit hard.

The bottom ten centimeters were shattered. The doctors sort of formed a new ankle out of the bones that were left. An amputation would have been easier, also in terms of the rehab phase afterwards. But I really wanted to be able to step on the gas pedal again.

Aren’t you at all afraid of another accident?
I am now. I never had that before the accident. Of course, you’ve heard the stories of Senna, Bianchi and co. But you always believe that it can never happen to you. There are new safety measures every year, and you forget that you’re putting your life on the line in this sport. Now, after the accident, I am more aware of the risks because I have experienced them firsthand. But surprisingly, it hasn’t led to any fear. When I’m in the car, I feel like I have everything under control. The adrenaline is like a drug.

How could racing be made even safer?
One hundred percent safety doesn’t exist in our sport. But I’m not one of the drivers who complained when the halo (cockpit bar; ed.) was introduced – on the grounds that the sport must remain dangerous. That’s bullshit. People who say that have never had an accident like me. I’m grateful for all the safety measures of the last 20 years. Otherwise, I’d be dead.

To what extent has the accident changed your attitude to life?
It has changed more in my attitude to life than to my career. It’s a life experience to be so close to death, to experience so much pain, to undergo so many surgeries, to be at such a low point. It makes you realize what’s really important in life. Most of us let our daily lives be determined by so many little things. We don’t enjoy what we have. That has changed for me. I enjoy every little detail so much more.

My situation has required me to consider alternatives for my life if I can’t get back in the race car. Before the accident, I couldn’t imagine how a lawyer could be happy in his life. It was clear to me that if you’re not a Formula One driver, then you can’t be happy in your life. Now I understand how stupid it is to think that way. And that gives me freedom, because I know that I have a lot of options in life.

Correa: “Not a day goes by that I don’t think about Anthoine or the accident.”

Last year you were in Spa for the anniversary of the accident. How did you experience the visit?
It was very emotional. The first time I saw Nathalie, Anthoine’s mother, was very hard. Not a day goes by that I don’t think about Anthoine or the accident. It’s a part of my life. So when I came to Spa, it was no longer a big deal for me. I was faced with it for a whole year. But for the people around me, it stirred up all kinds of memories that they hadn’t faced before. I felt that.

Are you still in contact with Anthoine Hubert’s family?
Yes. Here and there we write to each other. I think they are happy for me. They understand why I’m returning. Their son was a racer and they know how we are. Anthoine would do the same in my position. He was also very ambitious and a hard worker. His mum wrote to me, congratulated me. I showed her my helmet design, which will show an Anthoine sticker on the front and back. She also knows my team ART, because Anthoine also used to ride for the team.

Did you ever actually analyze the accident?
Often. I remember everything. I knew since the day after the accident that it wasn’t my fault. So I don’t feel guilty, which helps me a lot mentally. We were in the wrong place at the wrong time. The only thing that was hard for me to accept: Why did Anthoine have to die and not me? What gives me the right to live and not him? It also led me deeper into the question of the meaning of life. I haven’t found the answer to that yet.

What exact memories do you have of the accident?
I remember the crash, the impact. I remember trying to heave myself out of the car with my own hands. I also remember that if I had had a gun at that moment, I would have shot myself – just to make that pain stop. So when the paramedics came, I asked them directly to put me to sleep. I also remember their faces when they looked at my legs. I knew then that it didn’t look good.

When did you find out that Anthoine had died?
At the hospital. The police, who got involved because of Anthoine’s death, told me the morning after. After that, I mentally broke down. But I felt before that something bad had happened, because in the hospital they took down all the TV sets that were in my room.

Did you also have contact with racers who had similar accidents – like Billy Monger?
Yes, I was in close contact with Billy Monger. He also visited me in the hospital in London. His story is closest to mine. His comeback to racing gave me a lot of hope at the beginning. My biggest worry was that my legs would be amputated. Seeing him living his life and racing again gave me hope because I knew: even in the worst case it won’t be easy, but you can come back and be happy again. That was important mentally.

What is your goal in the 2021 Formula 3 season? You’ll be racing against David Schumacher, among others…
Beating David Schumacher is my only goal (laughs). No, my main goal is to get through the season without any medical problems with my legs. To get through the season without any major incidents. And I want to slowly become the rider I used to be. But it’s going to be a long road and I’m approaching it patiently.

You were also Mick Schumacher’s teammate. What do you think of his Formula 1 career so far?
I was his teammate in Formula 4, we know each other well. I’m happy for him. It’s great for me to see that drivers I raced against and beat are now successful in Formula 1 or elsewhere. That gives us drivers in Formula 3 and Formula 2 enormous confirmation. The level in racing is getting higher from generation to generation.

I hope Mick gets a good cockpit soon, because that’s the key to his career. With a top team, he can win the world championship. He is very talented, he is very focused. It’s great for Formula 1 and for Germany.