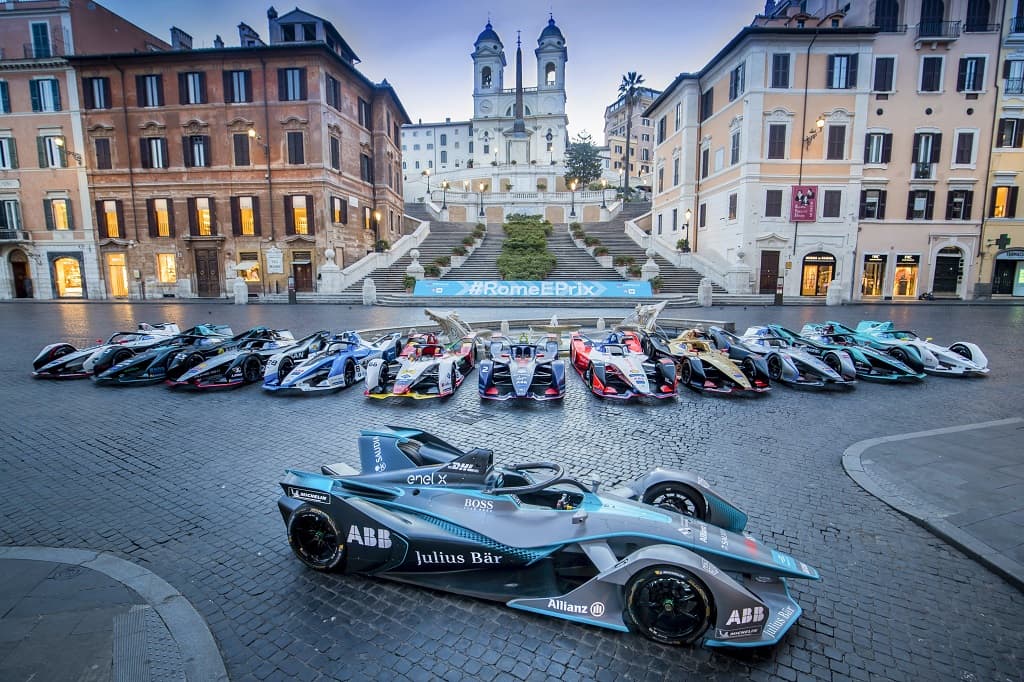 There is probably no other racing series more talked about than Formula E, the racing series with these futuristic looking e-vehicles buzzing through iconic city courses such as Monaco, Hong Kong or New York City.

No doubt, Formula E is hot right now. And after another double victory for Mercedes at the Spanish Grand Prix last weekend for the 5th consecutive race, bored F1 fans and sponsors might be thinking what’s going on at the electric cousin. Let’s have a look at why everyone is raving about Formula E, the key person behind it all and why even the godfather of Formula 1 thinks that this is the future.

Based out of London, the electric-powered racing series first launched in 2014. It is overseen by the same governing body as Formula One, the FIA and it is currently in the middle of its fifth season. In a recent interview, FIA president Jean Todt called it proudly, “youngest baby” that had “already achieved a lot.”

According to Todt, the idea for Formula E was conceived “during a dinner with Alejandro Agag,” the Spanish businessman who is currently the CEO and future Chairman of Formula E.

Besides, appealing to timely relevant topics such as sustainability and technological progress, Formula E’s comet-like rise is the merit of Agag. He himself is comfortable with the position the brand has evolved over just five years. In an interview he revealed:

“We can adopt crazy ideas that other sports can’t, because they have all this past heritage. We can risk fumbles.” explained Agag.

Ideas which include “attack mode,” which has been likened to a feature more suited to the video game franchise of “Mario Kart,” according to some newspapers. “It’s activated when drivers take their car off the racing line, and through the “activation zone” where they’re able to collect an extra 25kW of power for a few extra laps.”

“That has had a fantastic impact on the championship, on the viewership and on the fans. I think innovation for Formula E, like racing in cities, is part of our DNA,” said Agag.

There are a number of likely reasons why it has occupied a niche in the crowded world of motorsports, even though many critics have existed right from the start and still exist today.

First, races are generally more competitive with a greater spread of winning drivers. Seven different pilots have won one race each in seven races this season. The first ten in the overall rankings are within 21 points. For a victory, there are 25 championship points.

In Formula 1, Mercedes has recorded 5 consecutive double victories where only the name of the winning driver changed twice.

But most importantly, Formula E features cars that are powered by a 250kW motor giving them a top speed of 280kph (174mph). They are 25% slower than Formula 1 cars but, unlike the hybrid F1 engines, they produce little noise and no emissions.

With that, it has attracted many of the world’s leading automakers such as Audi, BMW, Nissan. Mercedes-Benz and Porsche will follow shortly. All these manufacturers have been using Formula E to showcase their “green credentials,” a trend that has been put into motion by Tesla and its eccentric owner and CEO, Elon Musk. Surprisingly, the one brand that is missing in Formula E is Tesla.

Another reason that explains Formula E’s rise to the top is that it embraces its differences, like operating on temporary street circuits built in or near the center of major cities, such as Hong Kong or Paris.

Jean Todt proudly proclaimed: “My dream has always been to get Formula 1 to Paris. We have accomplished that with Formula E.”

Yet, another reason might be the budget limits, that are still harshly debated within Formula 1 without any signs of progress. For example, a Formula E teams’ overheads are reportedly far cheaper than in Formula One.

According to a Forbes report, it has kept costs down for all teams. “Jaguar, for example, has put at least €36 million (about $40 million) into the sport so far. Compare this to budgets of almost $300 million the leading teams in Formula 1 spend each season.”

According to the latest filings and reports, Formula E generated a record €133.4 million ($149 million) in revenues thanks to new sponsorship deals and race tracks.  Viewers and spectators are also on the rise as more than 476,000 spectators attended the races in 2018, up from 220,000 the previous year according to reports.

Most of Formula E’s revenue comes from licensing and fees for hosting races from race organizers and subcontractors. There are 13 on the calendar including New York, Paris, and Monaco. Formula E recently announced plans to add back London to its calendar – most likely somewhere near London’s Docklands.

A big chunk of last year’s increase in revenue can be contributed to Saudi Arabia. Last May, Formula E signed a 10-year deal with the Kingdom to host races there. The value of that deal, which has not been previously reported, is around $260 million spread across the 10 years, according to newspaper sources. The first race in Saudi Arabia was held in Ad Diriyah in December last year.

In terms of sponsorship deals, income revenue rose $44m to $150m. About €12 million (about $13 million) came from Swedish corporation ABB, which became the title sponsor last year. But there are more.

According to filings: “A few new sponsors such as Bosch and Heineken also joined Formula E Championship since the end of the financial year, showing an ever-increasing popularity of the series.”

With all the good news out how about the bad news? Formula E is losing money – a lot of it – and if you believe internal sources it is mainly on purpose.

Formula E posted a €26.4 million (about $29 million) loss during its fiscal year ending July 31st, 2018, despite generating the increase in revenues. If you add this to the previous years’ losses the series has lost more than €150 million (around $168 million) since its inception.

In expansion mode, Formula E’s costs have risen mainly due to an increase of staff and investments into racing technology foremost into new cars and battery technology.

According to The Verge: “Agag is essentially operating the series like a Silicon Valley startup.” And there is nothing wrong with this strategy – at least for now.

As an insight person, Agag should know about potential growth and opportunities of Formula E.  He has been working relentlessly in spreading the brand of Formula E and in finding new sources of revenue that could help them achieve profitability eventually.

The growth numbers are his proof and right now, there is plenty of capital to go around with shareholders seemingly happy how Formula E has been evolving.

That brings us to the owners of Formula E. Formula E is controlled by its Hong Kong-based parent, Formula E Holdings.

Among many other names, its shareholders include Agag himself, Swiss bank Julius Baer, Discovery Communications and New-Wave, the parent of Weibo, China’s answer to Twitter and its largest shareholder Liberty Global which has a 23.9% stake.

Interestingly, Agag launched a €600 million (about $671 million) bid to take control of this loss-making enterprise. According to this report, he withdrew his bid because Liberty Media and Discovery Communications, which collectively own nearly 40 percent of Formula E, wanted to hold on to their stakes in the series.

“hey’re long-term investors in Formula E,” he told Autosport last September. “They believe in the future of the championship and they want us to continue working together and they don’t want to sell.”

In the official filings you could also read that in 2018 “the group successfully closed another round of funding, raising approximately €10.5m (£9m) of equity (€33m in 2017). The consideration was partly used to repurchase back some of the base shares from the CEO of the group for €5m”.

So instead of buying out Formula E, Agag was bought out himself – at least some of his shares.

In an interview with CNBC Agag said that he was flattered by comments made in April by former Formula 1 owner Bernie Ecclestone when he called Formula E the stronger investment bet as the future of motorsport.

“Bernie obviously is a genius. He created Formula One as it is today and he has a great vision of the whole map of motorsport and for him to say something like that I think is a great testimony for Formula E,” Agag said. He also told CNBC of his friendship with Ecclestone but played down his involvement in Formula E.

“Obviously I would welcome Bernie as an investor anytime, but we’re not there yet,” said Agag. “I think in general there can be very rapid growth in front of Formula E, but also simply because we are a lot smaller. So we have a lot more room to grow, because Formula 1 is bigger.”

And there are more honors from Formula 1. One Formula 1 megastar seems to be interested in Formula E – no other than Lewis Hamilton! It seems that he has been following Formula E closely. Hamilton:

“So far Formula 1 has always been everything to me. I’ve been racing since I was eight years old. If I quit Formula 1 one day, I’ll probably have to do deal with massive withdrawal symptoms like any pilot who leaves Formula 1. That’s why there are other racing series that I could compete in. Look at Fernando Alonso. He is driving IndyCar. Gary Paffett is a bit older than me and is now competing in Formula E. That is the future. So who knows?

Another name that was mentioned in Agag’s interview was Ferrari. The Italian luxury car manufacturer is set to unleash its debut range of hybrid supercar models by the end of 2019, prompting speculation that it might join Formula E.“I would love Ferrari to come, especially with Porsche and all the others here, it would be a great fight. You know let’s see. It’s an open invitation,” Agag told CNBC

Ferrari, the brand with the prancing horse, is already a key attraction within Formula 1. For that status, Formula 1 pays Ferrari a generous bonus out of a special bonus pool. But with racing rivals such as Mercedes and Porsche entering Formula E for the 2019/20 season, Agag could imagine Ferrari joining as well eventually.

“You will always have the niche of ultra-high powerful cars that will be able to run fast and I think Ferrari definitely is that. Ferrari would never limit the top speed of their cars, but they will have to adapt in the future to whatever the landscape is and of course, I think the landscape is electric,” added Agag.

Not Everyone is Convinced

With all the celebrity laudatio and support from key car manufacturers, there are a couple of skeptical voices as well.

Dr. Helmut Marko motorsport consultant at Red Bull Racing is among those skeptics, and he has this to say:

“As good as we are in marketing, Formula E is for us only a marketing excuse from the automotive industry to distract from the diesel scandal. The bottom line is that diesel is by far the most efficient engine.”

Accordingly, Red Bull seems to have written off Formula E  which does not interest the energy drink producer whose brand is synonymous with “extreme and dangerous sports.”

In other words, Formula E might be on the rise, but it won’t replace Formula 1 anytime soon.