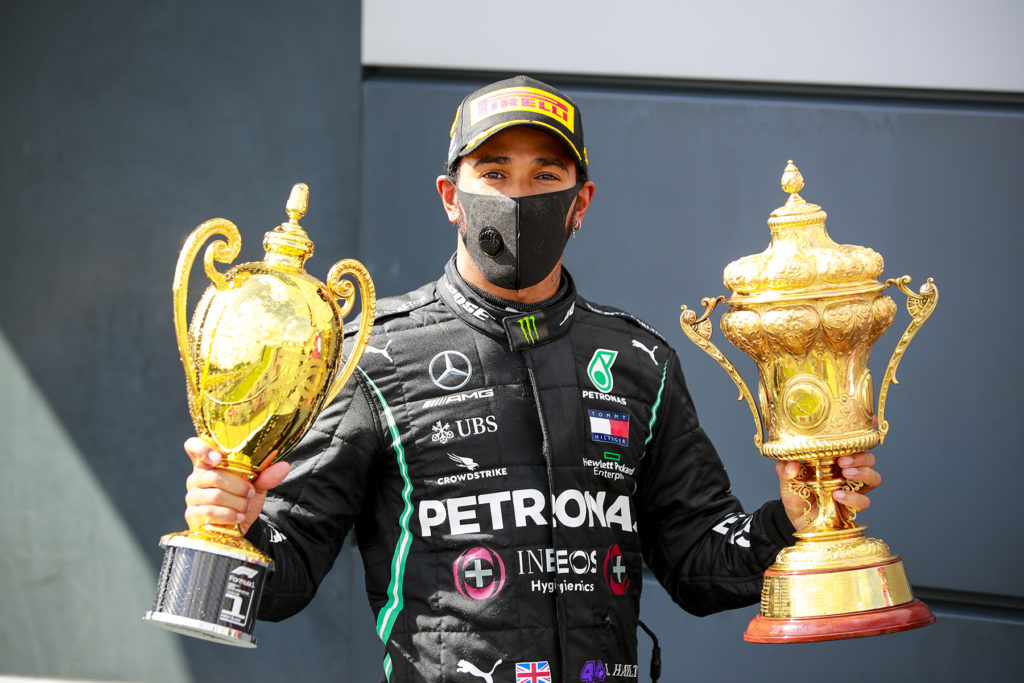 Lewis Hamilton Credit: LAT/Mercedes
The new contract between Mercedes and Lewis Hamilton is in the bag and includes a foundation that promotes equality. An interview from 2017 shows what really makes the Brit tick.
Bianca Garloff | 09. February 2021 , 13:58 Uhr

The new contract between Mercedes and Lewis Hamilton is in the bag and includes a foundation that promotes equality. An interview from 2017 shows what really makes the Brit tick.

The contract extension between Lewis Hamilton (36) and Mercedes – it’s finally done. On Monday the new contract was announced – exactly at 12 o’clock German time. High noon, so to speak. In the press release, the team is speaking of a one year contract. Without mentioning an option for another.

That was a bipartisan decision. Team boss Toto Wolff stated: “I think Lewis wants to concentrate everything on creating the best possible conditions for the eighth title. From an overall economic point of view, we also have a difficult environment.  Therefore we both thought we’d like to save these 2022 discussions now and just get on with the season.”

This also would mean the questions will start again in the summer: Will the Brit hang on for another year? Will he retire? Or will he change team colours again? One thing is certain: Only Hamilton and Mercedes know about the details anyway,  including all options, clauses, salary components.

Much more interesting, therefore, is the human aspect that the press release reveals. Because Hamilton shows he is  also keen to continue his fight for equality. “I am determined to continue on the path we started to make motorsport more diverse for future generations,” said the Briton. “I am grateful that Mercedes has been so supportive of my call to address this issue. I am proud to say that we are further intensifying the effort this year by establishing a foundation for more diversity and inclusion in our sport. I am inspired by all that we can build together.”

Hamilton had already made a strong commitment to Black Lives Matter in 2020, urging his fellow drivers to take a collective knee before the race – with the motto: “End Racism”. The seven-time world champion is thus increasingly becoming the Muhammad Ali of Formula 1.

How the Mercedes star ticks is shown, among other things, in an interview that the reporters from F1-Insider.com conducted with the now seven-time champion for Auto Bild and Sport Bild at the Austrian GP in 2017 – and which we are re-publishing here in parts on the occasion of the contract extension.

Mister Hamilton, today we try to find other ways to look into your soul.
Lewis Hamilton: Your T-shirt is a very good start (the SPORT BILD reporter is wearing a shirt with the inscription “Muhammad Ali”):

What does Muhammad Ali mean to you?
Very much. He is the greatest sportsman of all time for me. Not only because of his successes, but also because of his personality, his civil courage. Because of the values he stood for. For his social commitment. For what he did for all people of colour around the globe. For the way he consistently stood up for human rights. He is simply a legend.

Did you ever meet him?
Yes, but by then he was already strongly marked by his illness. He could hardly move. I don’t think he knew who I was either. But for me it was an uplifting experience.

Do you know his story?
Yes, I have read books about him and watched films about his life. My father was already a big fan of his. I know about him.

What did you learn from him?
Learned is the wrong word. You can’t learn anything from anyone else because we are all individuals. But he extremely inspired me.

Also because he stood for certain values: honesty, iron will, bravery, indomitability?
I don’t know exactly what I stand for yet. I’d have to think about it for a long time. But, yes, that certainly plays a big role for me subconsciously. One thing is certain: He was a diamond that shone brightly. Even today I watch videos about him. “Rumble in the Jungle”, for example. When I’m not in a good mood, it helps me.

Is it possible to  compare Muhammad Ali with Ayrton Senna? Another idol of yours.
That´s very difficult. They left their mark in different eras. They practised different sports. But yes, they have one thing in common: Their big hearts. And the energy they give me.

When you received Senna’s replica helmet after the qualifying in Montreal: What was going through your mind?
It was very emotional. I didn’t know anything about it. But talking about people who inspired me: Please don’t forget Nelson Mandela. He was not a sportsman, but for me he was also one of the greatest people ever. I’m sure Muhammad Ali would say that Nelson Mandela was the greatest ever. Mandela was in prison  for years  because he stood for his values. And Ali was at the forefront of the protest movement to free Nelson Mandela. Ali was also extremely committed to Hurricane Carter – a black boxer who was innocently in prison. Do you know him?

Of course. Bob Dylan did a song about him. Over eight minutes long…
…yeah, and Denzel Washington played him in a terrific way  in the film.

We are definitely on a good way to turn your soul out into the open..
Yes it always depends on your questions. For me, the story of Hurricane is one of the saddest and greatest of all.

Couldn’t Formula 1 do with a Muhammad Ali or Hurricane Carter? Or are we talking to one right now?
No, no, everything is different here. To be honest, I actually like boxing better. It’s man against man, not man and machine. It’s also less politics. Sometimes I wish Muhammad Ali would take all the rubbish out of me by telling me, “Hey man, I’m going to kick your ass. Get your act together.”

But you also know that Ali needed extremely big balls. He risked his life for his values. His brothers in spirit MalcolmX and Martin Luther King were just shot.
I know. Unbelievable. It was a difficult and fascinating time. But he stood up for his beliefs. Unconditionally.

But you have one thing in common with Ali: He had boxing to achieve his goals. You had motor sports. Neither of you lay on a bed of roses in your childhood. Did this help you to develop this extreme will to win?
Maybe. But I didn’t do it all by myself – my father supported me enormously. He is also an idol of mine. If there is ever a film about my story, he will play an important role.

Who could play you?
I don’t know. Preferably some young, unknown actor at the beginning of his career. Anyway, the first scene could be little Lewis in the kart. Formula One would only be five minutes. People always associate Formula 1 with making money. But that’s not what it’s about at all. It’s about competition. Against  yourself and against others.

Would you rather have raced in the old days, when racers were more men and took bigger risks?
I love driving. Ayrton loved it too. From a subjective point of view, I am taking the same risks today
as Ayrton did. The limit is always one hundred percent. Finding the limit, that’s what it’s all about. No matter with which cars or with which kind of run-off areas.

Senna is a good example. He hit Alain Prost’s car at top speed in Suzuka in 1990, was not penalised and was then world champion. Do you know why?
Yes, because they wanted to cheat him beforehand. He did what everybody wanted. He made sure justice was done.

Is that one of the truths of life  that is also important for you?
Yes, I want to be able to stand for  everything I do.

With seven world championship titles, Michael Schumacher is statistically the best Formula 1 driver of all time. Would you like to catch up with him?
I know I once showed in an interview without words with you that I would like to win eight titles. But to be honest, I don’t think I’ll be around long enough to do that.

Could it happen that you once wake up in the morning and don’t feel like doing it any more?
That won’t happen anytime soon because motorsport is still the centre of my life. I love the sport and give everything for it. But if it´s going to happen, that’s exactly the way  it would. Then I also would  stop immediately.

Lewis Hamilton has at least one year left in Formula One and is on course of winning his eighth world championship title. Motorsport is still the centre of his life – but he is increasingly putting into practice the thoughts he already formulated in 2017 in this conversation with us.

Lewis Hamilton, the Muhammad Ali of Formula One.