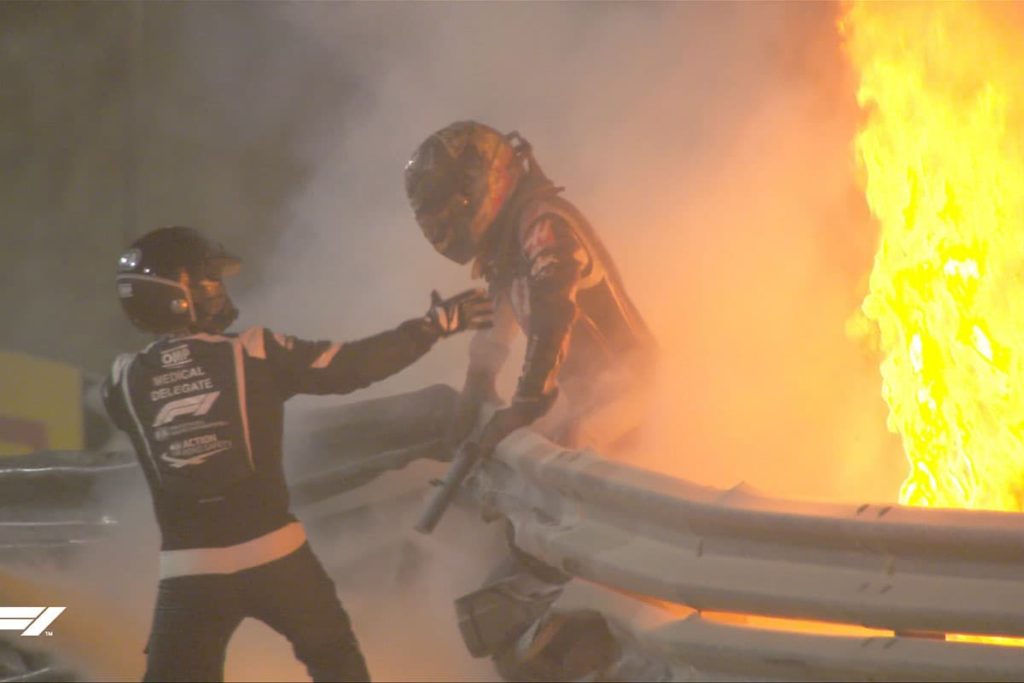 Romain Grosjean’s accident in Bahrain showed how safe Formula 1 cars already are. Nevertheless, the FIA continues to work on making the racing cars even safer. The Grosjean crash was also analysed for this purpose. The details are now available.

What is now certain is that the car squeezed through the first and second levels of the three-storey crash barrier and was torn in two. According to the FIA, the Haas crashed into the rail at a speed of 192 km/h at an angle of 29 degrees. A deceleration of 67g acted on the driver and car.

Because the fuel connection to the safety bladder of the tank was torn off, fuel leaked out and ignited. Even the battery of the hybrid system was ruptured. One part stuck to the monocoque, the other tore off with the drivetrain.

Grosjean’s left foot was caught in the cracked safety cell. The Frenchman could only free himself by slipping out of his shoe. He then removed the headrest and the steering wheel from the car in order to climb out of the burning race car. The whole procedure took 27 seconds.

By then, the helpers were already on the scene. The race was stopped 5.5 seconds after the impact. The medical car arrived 11 seconds after the collision. It happened so quickly because driver Alan van der Merwe took a previously discussed shortcut. Race doctor Simon Roberts immediately requested a marshal to spread fire-fighting foam around the car. In the end, everything went well – also because the helmet and fireproof overall did their job.

The FIA has drawn its conclusions from this and 18 other serious accidents. There will be a reaction in the following areas from 2021:

Cars:
Correction of the front geometry of the survival cell, additional load tests.
Review of the regulations regarding rear-view mirrors
Review of the requirements for the steering column
Review for regulations and homologation requirements for head rests
Analysis of engine pivot points
In-depth work on wheel safety cables
Review of the design of fuel safety bubbles in all FIA single-seater classes.
Recommendations on how to better integrate fuel bladders into the vehicle
Higher standard for fuel bladders
Review of fuel connector and inspection hatch designs
Review of fuel in terms of interaction with fuel safety bladder material

Driver safety equipment:
Research into improving the heat resistance of gloves
Research into better visor closure mechanisms that also work in the event of fire
Research into fire extinguishing systems for cars with open cockpits

How accidents increased safety in Formula 1

These are the darkest hours of Formula 1. The moments when the sport can become cruel. 32 drivers have died in a Formula 1 car on an official Grand Prix weekend – if you count test drives and non-World Championship races, the number is as high as 52. But each time they did so, they also made the series a little safer.

+++ Jochen Rindt (28) died in Monza in 1970. The brake shaft was broken and the Austrian was not wearing his seatbelt correctly. Rindt slid forward in the car on impact in the ultra-fast Parabolica. Two years later, the six-point seat belt became compulsory.

+++ In 1994 Roland Ratzenberger (33) and Ayrton Senna (34) had fatal accidents in Imola. It was the darkest weekend of Formula 1. During the season, tracks were defused by installing additional chicanes in 27 particularly dangerous corners. Later, the HANS system (Head And Neck Support) was developed to protect the head and neck area of the drivers.

+++ In 1998, there was a pile-up at Spa involving 13 cars. Torn-off tyres flew through the air. For the 1999 season, the tyres therefore had to be attached to the cars with a cable.

+++ Because track marshals were killed by flying tyres in Monza in 2000 and Melbourne in 2001, the cables now have to be made of stronger Kevlar. In 2000, “only” two ropes were mandatory, since 2018 there are three retaining ropes.

+++ In 1999, Michael Schumacher had his most serious Formula 1 accident at Silverstone. The brake was defective, a screw was not tightened properly. Schumi crashed head-on into the tyre stacks at Stowe and broke his right leg. In 2006, so-called TecPro barriers made of plastic and foam were used for the first time to better cushion the impact.

+++ In 2009, a metal spring weighing 800 grams came loose from the car of Rubens Barrichello during qualifying for the Hungarian GP and hit Felipe Massa on the head. The Brazilian’s visor was penetrated, Massa was injured above the left eye and had to be put into an artificial coma for two days. Since 2011, drivers have therefore had to have a band of sturdy Zylon over the visor, which is also used for bulletproof Westerns.

+++ In 2014, Jules Bianchi (25) was the last Formula 1 driver to suffer fatal head injuries. The direct consequence of this accident are the cockpit protection Halo and the virtual safety car.

This is how Formula 1 improved safety over the years:

It was not until 1952 that Formula 1 introduced compulsory helmets for drivers, and not until 1967 that seat belts became compulsory.

1970: For safety reasons, fans now have to stand at least three metres away from the track. A dividing wall between the track and the pit lane becomes compulsory.

1971: Drivers must be able to leave the cockpit within five seconds in the event of a fire (tested).

1972: The six-point seat belt becomes compulsory to prevent drivers from being thrown out of the car in the event of a rollover – two years after Jochen Rindt’s accident.

1979: The cockpit openings are enlarged to make it easier to leave the car in an emergency. Some drivers compete in five-layer fireproof overalls for the first time, including Niki Lauda.

1981: The carbon fibre monocoque becomes established and is extended to include the foot area.

1985: The first crash tests for the front section of the racing car find their way into the regulations. From 1988 onwards, such load-bearing tests are also carried out for the entire monocoque. Over the years, the rules are further tightened and extended to other components.

1992: For the first time, the use of the Safety Car is precisely regulated. Previously it had only been used sporadically.

1994: After the death of Ayrton Senna, who crashed at Imola, 27 corners on various circuits are defused during the current season.

1995: Side crash tests are introduced.

1997: From now on, every car must have an accident data recorder on board. In addition, the rear end must now also withstand impact tests.

1999: To prevent tyres from becoming a deadly projectile in accidents, they must be secured to the cockpit by means of tethers.

2000: The impact speed in the front crash test increases from 13 to 14 metres per second. The carbon fibre walls of the cockpit must be at least 3.5 millimetres thick.

2003: The Head-and-Neck Support System (HANS) is introduced; it stabilises and protects the driver’s head and neck in the event of an accident.

2005: The protective pads in the cockpit are reinforced. The retaining cables of the tyres now have to withstand forces of up to six tonnes. Front wings and other aerodynamic components may no longer be made of arbitrary materials. Extra-hard Kevlar becomes mandatory.

2006: Tecpro barriers are experimented with for the first time as trackside barriers. The plastic blocks absorb 40% more energy than conventional tyre piles.

2011: Helmets must now have a Zylon band over the visor to protect riders from flying parts.

2016: Virtual SafetyCar phase is introduced after Jules Bianchi’s fatal crash with an excavator at Suzuka.