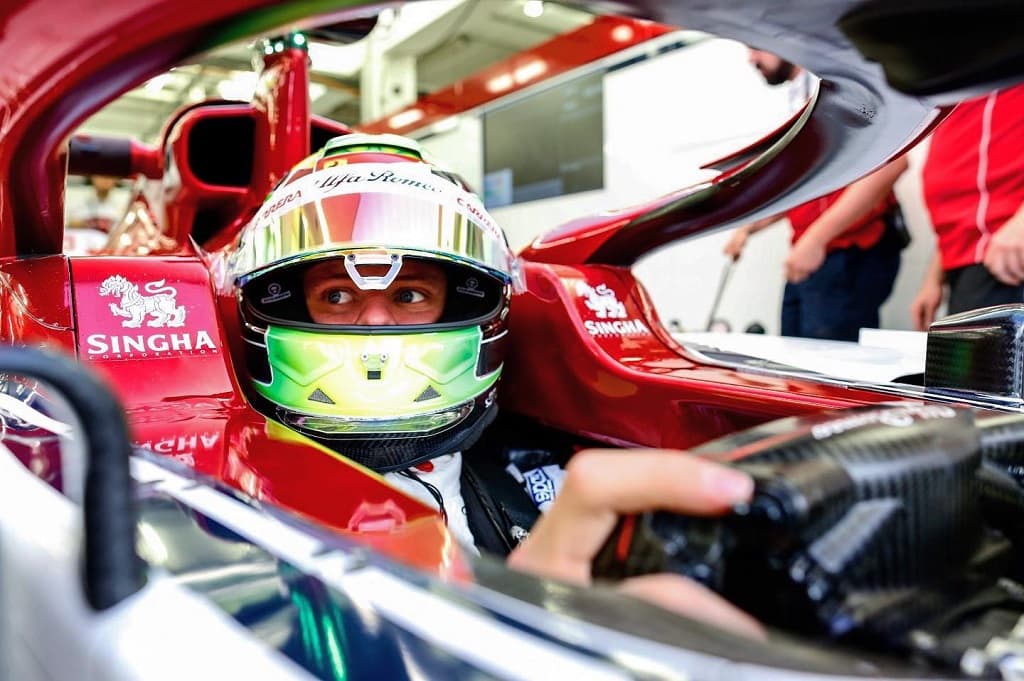 Mick Schumacher in a Ferrari and Alfa Romeo

It was a historic day for Mick Schumacher, Ferrari and all Schumacher fans. After a long wait, finally, another Schumi sits in a Ferrari again.

It’s a legendary combination: Schumacher and Ferrari. Today is the first time since 2009, that a Schumacher sits in a red racer again. Mick Schumacher is allowed to pilot the SF90 of Sebastian Vettel and Charles Leclerc as part of his junior testing program. It is his first test in a modern, 1000 hp Formula 1 car.

“Of course I’m more than excited and I want to thank Ferrari for giving me this opportunity,” he said earlier. “I am really looking forward to it because it will certainly be a great experience for me.”

That was pure emotion when Mick Schumacher drove away in a Ferrari on the Bahrain circuit. However, just the next day, the son of record world champion Michael Schumacher sits in another F1 car – this time the Alfa Romeo.

While he was driving his car with the number 29 just the day before, today he is racing with the number 36. And again, the combination Schumacher-Alfa Sauber connects him with his father and is a historic moment. Like his son, the record champion also tested for the Sauber team as part of Mercedes Group C to ignite one of the most astounding racing careers in F1.

Unlike the Sauber Team his father experienced, today, Sauber is powered by Ferrari. And like a professional F1 driver Mick talks about his experience so far: “I enjoyed it 110 percent and still have a grin on my face. The car powers out of the corners really well. But we have to take it with respect. If we lack respect, it will be dangerous with over 1,000 hp. “

Ferrari Power and The Magic Limit

Over 1000 hp? Did Mick Schumacher incidentally reveal that Ferrari engines have broken through the magic limit of 1000 hp? It is very likely. Already last year, insiders believed that the Mercedes drive has cracked the 1000-horsepower mark. When ABMS and F1 Insider approached Mercedes engine chief Andy Cowell to talk about his 1.6-liter V6 turbo hybrid at a test in Barcelona, the Mercedes man answered openly with a proud smile on his face: “This year only? We had that much power last year already … “