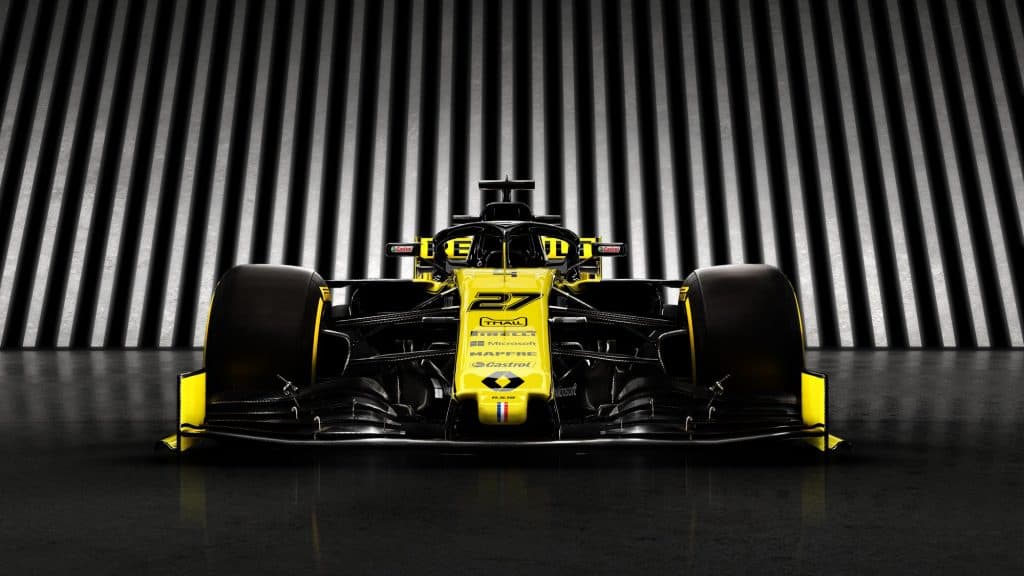 The color of hope is Yellow-Black! In the fourth year after the comeback as a factory team, Renault wants to take the final step to become a winning team again. They have a new driver and a new car – the R.S.19 and the spirit to win! Read here what the new Renault F1 Team has in stock for 2019.

One must look very closely to recognize the differences in the new car compared to the previous year’s model.

Front and rear wings are wider and thus adapted to the new regulations. The rear spoiler is positioned on two rather than one vertically upwardly positioned stilt.

This allows a controlled bending to the rear at top speed and reduces air resistance. The square side baffles are attached to the bottom instead of the side boxes as can be seen at the new Toro Rosso car.

The cooling inlets are more angular and narrower than last year’s version. As with the Toro Rosso, the two wings are growing out of the chassis next to the nose.

A New Team – A New Spirit

The new car might not have changed much, but the new driver combination is more than exciting. With several times race winner Daniel Ricciardo, Nico Hülkenberg will get a formidable new teammate.

Daniel Ricciardo is the sunny boy of Formula 1, who still represent the F1 heroes of the wild 70s, i.e. girls, men, and motors.

To hear more of these hero stories from the good old days of F1, he shouldn’t go any further than talking to French racing legend Alain Prost.

The French former world champion is now a consultant and brand ambassador to his native French F1 racing team. He was also the driving force behind signing on the Australian F1 star, something that didn’t come cheap. It is rumored that Ricciardo collects €15 million per year.

It wasn’t easy, though. Ricciardo hesitated for a long time. By summer 2018 he had three concrete offers and two inquiries from teams whether he would be interested to switch.

Red Bull wanted to extend his contract, McLaren and Renault had concrete offers, Mercedes and Ferrari showed interest, but nothing beyond that.

Ricciardo: “One morning in August I woke up and I was sure, I needed a new challenge and that was Renault. I see a lot of there. Renault has always won races and eventually World if they drove in Formula 1.”

Group CEO Carlos Ghosn had already approved a budget for the of 2019 of around 300 million euros. That of course, was before Ghosn was arrested for accounting irregularities at Japanese car manufacturer Nissan.

There is no doubt, with hiring the Australian superstar the French team is now under enormous pressure to show results.

With a new driver and a mighty budget, the goals are clear: To regularly be on the podium in 2019 and to win races and titles by 2020. This season, according to instructions from Paris located HQ, the team should improve from fourth to third place in the constructors’ championship.

Unfortunately, in order to succeed, the French team has to beat one of the big three: Either their former engine customer Red Bull, Ferrari or Mercedes. In other words, they have to beat the teams that shared all victories since 2014 among themselves.

Nevertheless, everyone at Renault believes they can overcome this final hurdle and take the next step forward. “For us, 2019 is a year of consolidation and hopefully progress,” says team boss Cyril Abiteboul.

“We want to reduce the gap to the top teams! How to do it? Very simple: We now have the drivers and the next goal is an excellent engine.”

Among many improvements, the hybrid system and internal combustion engine have been even better integrated into the chassis. According to Chief Technology Officer Nick Chester: “We’ve been focusing on getting the aggregates tighter and hence reduced weight. We will be able to add significantly more ballast to experiment in 2019.”

Motor CEO Remi Taffin adds: “The progress for 2019 is satisfactory. We were able to improve performance while maintaining reliability.”

CEO Marcin Budkowski, 41, who joined Renault from last year’s FIA, is also optimistic. Especially because of signing Ricciardo:”Daniel is a race winner!” – “He brings some experience to our team that we currently lack, which will help us with the alignment, development and set-up of the car.”

“It is a motivational boost for everyone in the team that someone like Daniel joined us, which is also a clear indication of his qualities as a driver and character. That someone like him believes in our mission is clear of it!”