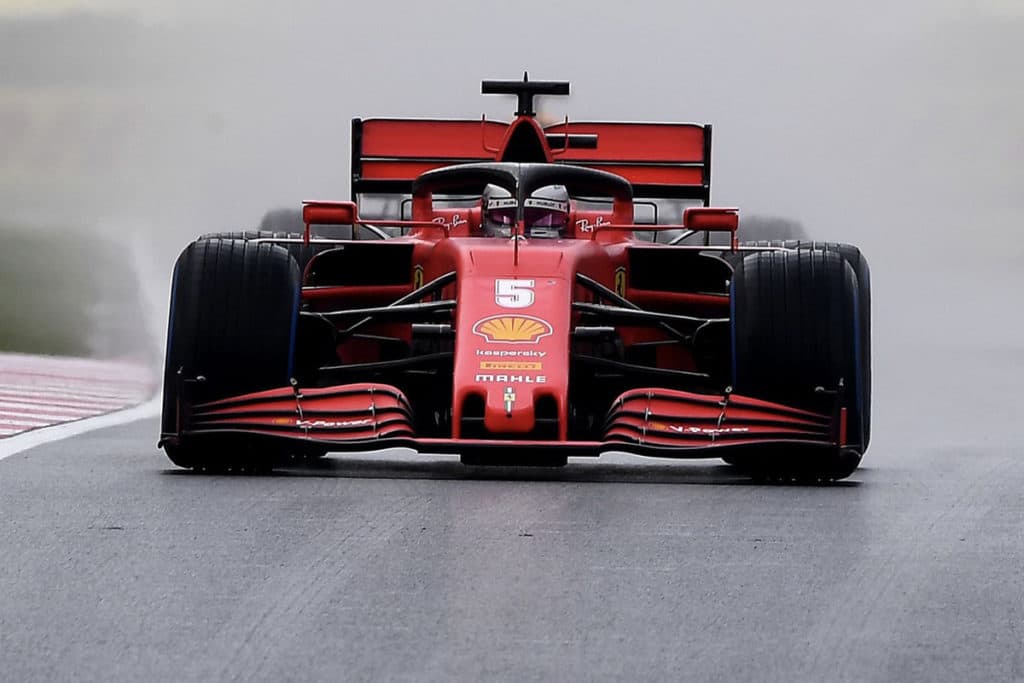 Sebastian Vettel celebrates his comeback on the podium at the GP of Turkey. In the rain of Istanbul he passed his team mate in the last corner

Was it coincidence or a sign from above? When Sebastian Vettel (33) just returned from the press conference of the first-placed drivers, a beautiful rainbow appeared over the Istanbul track. It had the same colors that the German had chosen for his helmet in Turkey – the colors for equality, tolerance and, in the end, also for justice.

Justice must have been fair to Vettel that after a season full of bankruptcies, bad luck and breakdowns, he was able to take the podium (third place) for the first time since Mexico 2019. With a Ferrari that was very difficult to keep on the road on the permanently wet and slippery track. It must also have seemed fair, that he was able to overtake team mate Charles Leclerc in the last corner. And that at the first race, at which team boss Mattia Binotto – not exactly the German’s biggest supporter – was not present, Vettel and the entire Ferrari team were able to achieve the best result of the season so far.

Certainly he had these thoughts in his head when he went to the microphones waiting for the “resurrected” after the race. Alone: he preferred to keep them to himself.

“The decisive factor was my good start,” the German therefore explained quite seriously. “I got off well on the slippery road, risked a lot and also benefited from two cars spinning in front of me. Suddenly I was fourth and had thus laid the foundation for a good result”.

Although Vettel had made up seven places on the first lap, it was anything but easy. But even another failed pit stop (five instead of three seconds) couldn’t knock him out of it this time. “It took a bit long. After that I also lost time on Leclerc. Maybe I was a bit conservative then. But towards the end my tires worked again. That’s why I was able to get back up to two after a six second gap. And then I benefited from his mistake in the last corner. I almost even managed to finish second.”

Immediately after the race he bent down to winner Lewis Hamilton, who, with his victory, also took his seventh World Championship title and sat visibly moved in his Mercedes. “I told him that we were allowed to witness him making history,” the Heppenheim native told us. Is Hamilton the best of all times? “Certainly the best of our era,” said Vettel. “Emotionally, it is still Michael for me. But you can’t compare the epochs. Would we have been scared shitless if we had had to drive the cars of Fangio or Stirling Moss back then? Would the cars of today have been too fast for them? That is not to be answered. What is certain is that Lewis is the best of our generation. He has proven it again today: Actually, it wasn’t his race today in terms of the conditions. But he won it anyway.”

To doubters who had questioned his own abilities during this season, he clearly said: “I have never doubted that I can achieve success when things are going normally. That’s why such questions surprise me”.

What Vettel could not have known: His comeback on the road to success even gave some comfort to the losers of the day. Red Bull chief advisor Helmut Marko was frustrated. The doctor had imagined the 300th Red Bull race differently. To F1-Insider.com he says: “Our two drivers didn’t have the best day and made mistakes. But I was extremely pleased that Sebastian was able to overtake Leclerc in the last corner and thus made it to the podium. Then he was back to his old self again.” Vettel will be pleased with the words of his ex-boss.