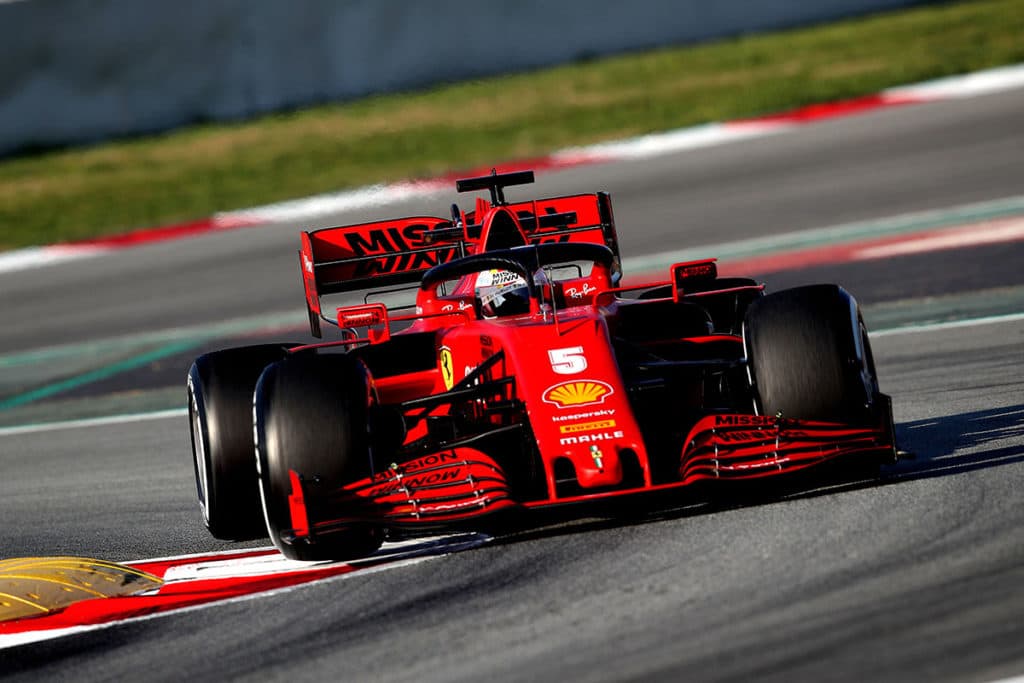 F1-Insider.com spoke with RTL Formula 1 expert Timo Glock about the upcoming season, Vettel and Ferrari, Max Verstappen and the DTM

Mr. Glock, how much did the Formula 1 shutdown of RTL shock you? You have made a name for yourself as an expert there in recent years.

Timo Glock: It was a shock and I didn’t expect it. But with the economic situation due to the Corona crisis, you can understand the move. Others offered much more for the television rights in Germany, and RTL probably didn’t want to go along with that. That is a great pity.

…but for now only from the studio in Cologne. There’s another problem: We have some overlaps with DTM races. You have to see now which races I can do. For the first race this weekend in Austria I’ll definitely be there from Cologne.

What can we expect from the first race this weekend. Is there a Hamilton/Mercedes dominance again?

The teams had a lot of time to develop their cars. But if you look at the tests in Barcelona in February, not much has changed at the front. Mercedes is in front, Red Bull has caught up and Ferrari has taken a step backwards.

So can we expect a four-way battle for the title or is it a duel between Mercedes superstar Lewis Hamilton and Red Bull mega-talent Max Verstappen?

I think that’s the most likely scenario. Bottas has to get out of Lewis’ shadow, but I think that’s difficult. At Red Bull, Verstappen is clearly the number one driver for me.

As a former Formula One driver with several podium finishes: Can you see immediately that with Verstappen, a very special talent in the scene is making his way?

Yes, his special talent was already evident in karting and then in Formula 3. He made a few mistakes at the beginning, but gradually minimized them. That distinguishes the best: That they also learn from their mistakes and then take the next step. Basically, however, it was and is the unbelievable speed that defines him. I think he is ready for the title this year if he has the car for it.

READ MORE – Helmut Marko: “Vettel retirement would be a loss for Formula 1”

Are you surprised that the marriage of your buddy Sebastian Vettel will end at the end of this year?

At first, yes. I really thought Sebastian was going to stick around for another year or two. But when you think about it, his stress with teammate Leclerc, with Ferrari, where things didn’t go his way, it was hard to find a common denominator in the end.

Was the stress with Leclerc the main reason for him to leave Ferrari?

I think so, yes. With a five-year contract, Ferrari has made it all too clear who you are counting on in the future. Sebastian was aware of that too. That got him thinking. Especially that Leclerc’s management has a strong influence on Ferrari.

What can we expect from the Ferrari duel under these circumstances this season? Will Ferrari play fair?

In any case, Sebastian will not let himself be told anything in his last year. Even if there would be a team order, he won’t pay attention to it, he won’t stick to it because he will only drive for himself and try to get the best out of it. So it could be very interesting when the two of them meet. The only way that Ferrari has to favor Leclerc is by race strategy. But I can imagine that Sebastian already has a plan to prevent this before.

Vettel won’t stop. Does that mean that every race for him will also be a bid for 2021?

Yes, that’s right. The question is: does he want to drive in a top team or will he settle for a team that can drive in the top five? But there are not many options left. In my opinion, only Mercedes and Red Bull from the top teams or Renault, but they are not able to drive in the WRC.

Can Formula 1 afford to lose a four-time world champion who can still drive at the highest level of his ability?

Not really. To lose a calibre like Sebastian would be an extreme loss for the sport. The marketers do have some influence, but unfortunately not enough to determine who drives where. That is still decided by the individual teams themselves.

Mick Schumacher is the only German who is already in the pipeline for the top class as a Ferrari junior. How do you rate his chances of getting a cockpit in 2021?

That depends a lot on how his season in Formula 2 goes this year. If he takes the next step, I can well imagine that he will already be in Formula 1 on Fridays at the end of this year and maybe next year he will get a regular cockpit with Ferrari partner Alfa-Romeo, for example. Of course that would be very important for us Germans.

How can Formula 1 be led into the future?

With all the problems caused by the Corona pandemic, manufacturers must first ask themselves whether they still want to afford Formula 1. In any case, it is very important that Formula 1 reduces costs. They are already on the right track with the budget cap.

Let’s come to DTM: You are a BMW works driver. Were you able to prepare yourself optimally for the season despite all the constraints?

Yes, I was able to do my normal fitness training like the years before. That was no problem.

How does a DTM driver deal with the Corona situation? There are fewer races in the DTM. Do you take more risks then?

No. Because we have nine events instead of ten. I just go into the season as normal. As always, I try to get the best out of every race and then see where I stand at the end.

What can you expect from BMW this season?

We have definitely made a step forward. The car definitely felt better during the tests. Will that be enough for the title? But Audi didn’t sleep through the winter either. It will be very close.

As defending champion, is René Rast the one to beat?

For now, yes. But there are a few that I have on the list. Marco Wittmann from us, a Nico Mueller has to be considered. And I hope I can also play a little bit for the title.

What does Audi’s withdrawal at the end of the year mean for the DTM?

That’s an extreme pity, but it didn’t come as a complete surprise either. I hope that Gerhard Berger manages to find another great platform for the DTM. Even if it’s a mammoth task.

You also know Alex Zanardi very well. How do you deal with his serious accident last week?

I am with him in my thoughts and pray for him. My thoughts are naturally also with his family. That’s all I can do at the moment.

You drove the “24 hours of Spa” with him in 2019 as a team mate. Has this deepened your friendship again?

We knew each other before, but Spa was a special experience. The energy he can develop, the will he has, the way he can torture himself was extremely impressive.