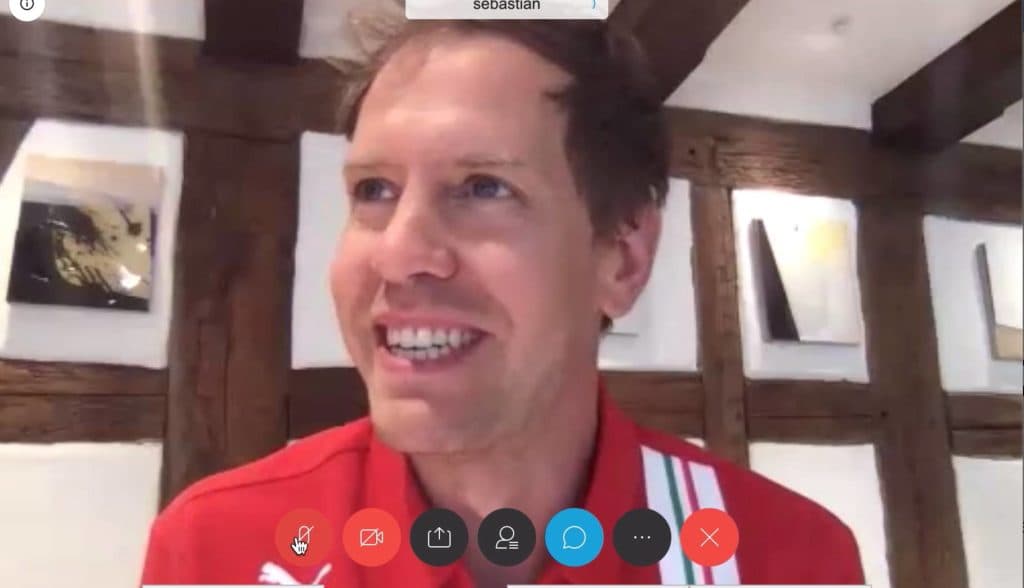 Vettel sees Corona-break as an opportunity

Sebastian Vettel (32) rarely grants private insights. But currently the Ferrari star cannot avoid it. There is a standstill in Formula 1 – and press talks are now taking place virtually.

Vettel reported yesterday via Ferrari video conference from his house in Ellighausen. You could see thick bars of the former mill in which he lives, pictures of an unknown artist on the wall – and a racing driver who was in a good mood in his Ferrari shirt.

Most journalists still had tired eyes at the start of the press round at 8.25 a.m. Vettel not. He had been awake for two hours. For a simple reason: “I start my days early so that I have a lot of time to train.”

VETTEL ABOUT LIFE DURING CORONA

“Lying in bed for a long time? It’s not working with the three kids. It is a program all day long. We have been very lucky so far that the weather plays along, which gave me the opportunity to look at the house and do things in the garden that had previously been left behind. Fortunately, I am not dependent on a gym, but have all the equipment at home so that I can continue exercising without any problems. But, yes, it’s starting to tingle, I miss driving.”

WHAT THOUGHTS HE HAS AT THE MOMENT

“The situation is serious. It is difficult to remain patient. We have seen that our Chancellor, the government and the states have loosened the reins somewhat, but we must continue to act responsibly. But it’s also a great way to put a lot of things on restart. It is a contemplative time and I hope that the appreciation for the seemingly unimportant things will remain, even if we all want to get back to normal life as soon as possible. This is an opportunity for all of us to press the reset button and find out what is important in our lives. And hopefully the conclusions that everyone draws for themselves are also tenable.

The pictures from Italy in particular are terrible and formative. Some team members are more affected, for example, the grandparents are in the hospital. There were no bad reports in my immediate vicinity. The important thing is that everyone who is doing well should now be aware that there are people who are currently not doing well. So we should all stick to the restrictions.”

ABOUT WAIVING SALARY DURING THE CRISIS

“I will discuss this with the team. We still don’t know what the season will look like. I have always kept such decisions private and I will not use the topic now to polish my image.”

“At the moment nobody knows what we can expect from this year. We have to be patient. Ten, 15 or 25 races – a season is a season and you still have to be the one who constantly performs best to become world champion. ”

ABOUT HIS CURRENT CONDITION AND HIS CAR

“I would be ready and I am physically better prepared than in March now. The car is not being developed further, but of course the head is not standing still. If there are still flashes of inspiration from the test drives, you can forward them. Hopefully when the factory opens again, there will be so many good ideas that we can improve our car. Thoughts are allowed. On the one hand it is of course a risk, the others have the brainstorms too. But I see the break as an opportunity for us, because we had a little bit of a problem with testing. If everything is unlocked again, this does not mean that new parts will slide out of the 3D printer. It will still take a while.”

ABOUT THE FAILED RACES

“What I miss most is Hockenheim, but this race wasn’t on the calendar anyway. Melbourne, Monaco, Montreal will be missed, it will be very hard if Suzuka would also have to be cancelled. ”

“Nobody likes to drive in front of empty stands. It feels strange. On the other hand, a ghost race could of course be held earlier than one with spectators. You have to weigh up the economic aspect of Formula 1 that teams and series survive and the image of sport. Therefore, you should not take quick shots, but rather wait and not run ghost races. I ALSO don’t think it would be the same on TV to drive in front of empty seats.

“I didn’t have a simulator until recently, so I didn’t have a chance to participate. I’ve got one now, but I still have to install it. I somehow grew up with video games. More and more friends have now put pressure on me to go racing with them. But I don’t want to embarrass myself, so I still have to train. But I am not aiming for a virtual career. Nice for Charles (Leclerc, Ferrari team-mate, the editor) that he won the virtual F1 race, but for me it’s more of a fun event. My focus is on reality.”

ABOUT THE DAS FROM MERCEDES

“I don’t think that DAS decides whether Mercedes wins races or not. Mercedes knows best how much it brings. You have to admit fairly: Formula 1 is about details and that is such a detail. But we also have a lot of things in our car that could make the difference.”

ON THE SCANDAL AGREEMENT BETWEEN THE FIA AND FERRARI

“What I know is clear: The FIA ​​and Ferrari have reached an agreement on the subject and, as I said in Australia: We all trust the FIA, which looks at the teams so that they do nothing illegal. If that had been the case, we would have been disqualified. ”

ABOUT HIS FERRARI CONTRACT THAT EXPIRES THIS YEAR

“First of all, the contract negotiations were of course on hold, like everything else. Health and the fight against the virus are currently a priority. So we now have a little more time on this topic. There is currently no schedule for this either. The contracts I had in the past were all three-year deals. I am one of the most experienced drivers in Formula 1, but not the oldest. There is no age limit in this regard. “

ABOUT OTHER BUDGET RESTRICTIONS FOR TEAMS FROM 2021

“If this special situation helps the sport, that the gap between big and small teams gets smaller and we get better racing, that would be a nice side effect. As a Formula 1 family, we should definitely also look at the small teams whose existence is now threatened.”