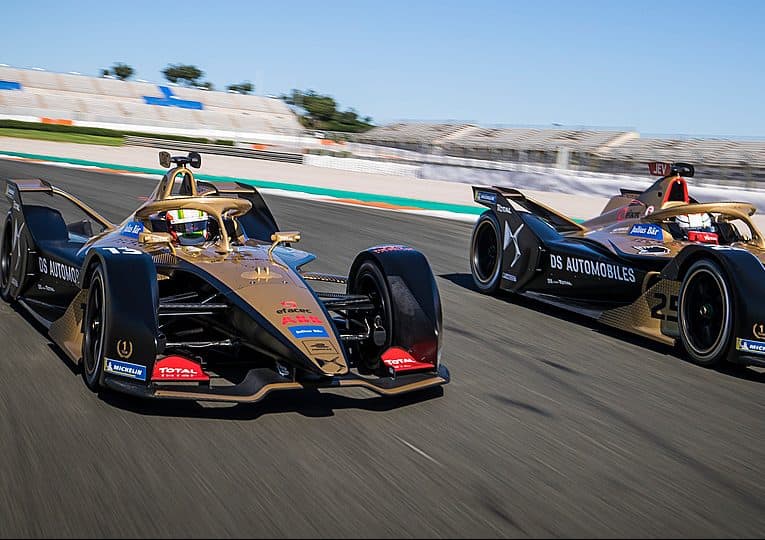 Formula E is booming. The series (starting in Riyadh on November 22) will not only have all four German premium manufacturers (Porsche, Mercedes, Audi and BMW) competing with each other, but also the series fits perfectly into the ‘Zeitgeist’ of today.

It represents sustainability, environmental awareness, and entertainment with a green touch. Even the drivers acknowledge the changing winds, whose carbon footprint was anything but small.

The reigning double champion Jean-Eric Vergne (France): “In Formula E we are more than racing. We are fighting for a greener planet, we are fighting to change the mentality of the people.”

The bigger the stars, the better for the mission. That’s why Formula E is smoothing the world champion of Formula 1 – Lewis Hamilton. Only recently, has Lewis Hamilton expressed his deepest concerns for our planet on his Instagram feed.

Vergne: “So it would be logical for him to get into Formula E and not just write history as a racing driver, but also to inspire people.”

“So it would be logical for him to get into Formula E and not just write history as a racing driver, but also to inspire people.”

“Toto Wolff has already offered Lewis a test and we talked about it… He is welcome, but there are currently no plans.” Sure, because right now, Mercedes is preparing for an intense season ahead.

Thanks to all major German manufacturers participating, this alone guarantees the “battle of the giants”. The first skirmish so far has been decided in favor of BMW. Their new pilot Maximilian Günther achieved the fastest time on Friday testing, which was part of a four-day testing period. It is a new track record.

“I’ve felt very comfortable in the car all week .. Experience shows that BMW has a strong package. But how strong it is and what role we play exactly, we have to see at the first race. I will be fighting for top results and, of course, for victories.”

Lotterer admitted, that for him a dream came true:

“If a team has all the ingredients for victories, it’s Porsche! But this is going to be a hell of a fight.”

So far, both newcomers, Mercedes and Porsche, fought with initial setbacks. Both teams finished only 19-22 respectively. However, the test results aren’t representative of the whole season. Valencia is a classic racetrack, not a street circuit that is commonly used in Formula E racing.

The first race in Europe will be held on April 4th. After the races in Rome, Paris (18 April), Berlin (21 June) and London (25/26 July), the European champion will be crowned. The winner will receive a new title: “Voest Alpine European Races!”