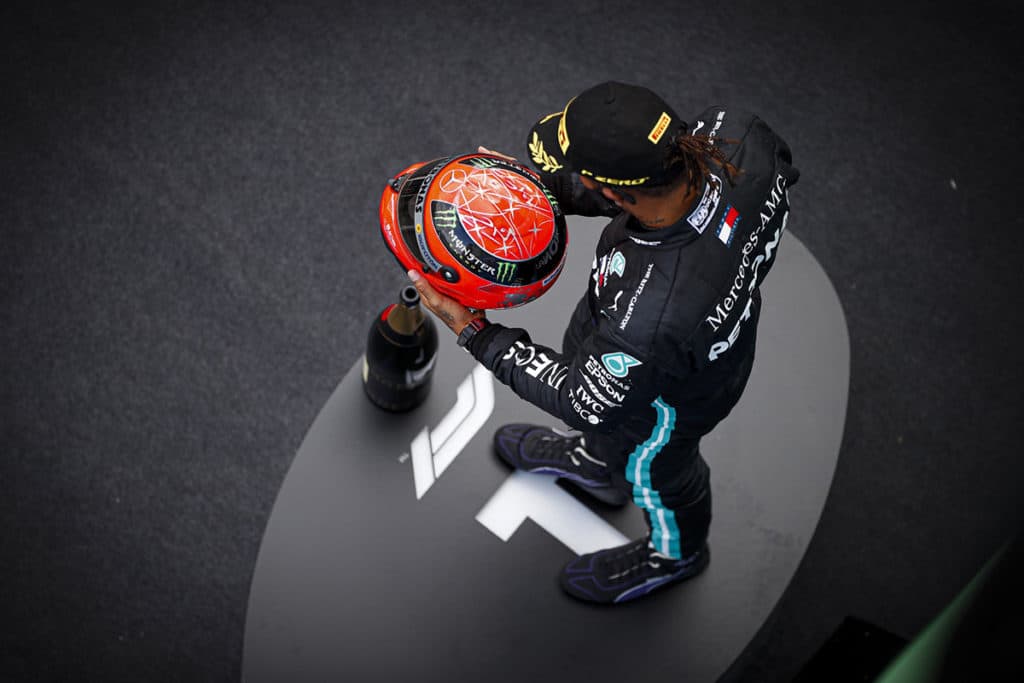 Lewis Hamilton took his 91st victory at the Nürburgring and drew level with Michael Schumacher. An attempt to compare the two top stars of the top class

When Mick Schumacher presents Lewis Hamilton with his father’s helmet, even a cool Swede is not left cold. Mercedes board member Ola Källenius (51), who usually prefers to stay in the background and put others in the spotlight, is particularly emotional in view of Lewis Hamilton’s 91st victory. “It was a pure goose bump moment and a very beautiful moment,” says Källenius, describing how he experienced the scene in which Mick Schumacher presented Mercedes star Hamilton with a helmet from his father.

The Mercedes boss was also happy to answer the question of when the contract with Hamilton would be extended – albeit somewhat more vaguely. “I have heard that Toto Wolff and Lewis have not yet been able to meet because of Covid-19. I can only say that Lewis and Mercedes are a very good match.”

From that, I can deduce: Contrary to what experts such as Nico Rosberg suspect, Hamilton’s future at the automotive group is not automatically linked to the future of the team boss. Källenius knows: Hamilton is now a legend that should not be lost as a representative of the noble brand with the star.

In fact: In the current Formula 1, Hamilton is running out of opponents, apart from Max Verstappen. What else is left but to continue chasing the phantom Michael Schumacher? He is still the record champion with seven world championship titles. But there’s more: Hamilton’s seventh title this season will only be taken away from him if he were to be eliminated in several races.

The question is therefore obvious. Who is the better man? The comparison is difficult, because Schumacher and Hamilton achieved their successes at different times. This is also how Ralf Schumacher (45) sees it. The Grand Prix winner and brother of the still-record world champion told F1-Insider.com: “Both have achieved gigantic things. But each in his own time. I think Lewis will break all records. You can only begrudge him that.”

One who was a team mate of both is former world champion Nico Rosberg. Born in Wiesbaden, Germany, Rosberg drove with Schumacher in the Mercedes factory team from 2010 to 2012 and then with Hamilton from 2013 to the end of 2016, but Rosberg goes on to say: “When I drove with Michael, he was already past his zenith. While I experienced Lewis at the peak of his career”. Rosberg continues: “Lewis probably has a bit more natural talent than Michael. Lewis is probably the greatest natural talent our sport has ever seen. This is how he makes the difference. Michael’s work ethic was different. Lewis does a lot more with instinct, but Michael was the complete package. He made the difference as an all-rounder, with meticulous work, obsession with detail, team spirit, with which he builds a team in a leading role. Working hard: That was Michael’s greatest strength. And he was also a warrior.”

Eddie Jordan sees Hamilton in the front. The former team boss and current BBC expert gave Schumacher the chance to make his Formula 1 debut in his Jordan team in 1991. Jordan comments on F1-Insider.com: “Basically, there are only four drivers who have shown such talent, such incredible speed, such self-confidence at a young age. Ayrton Senna, Michael Schumacher, Lewis Hamilton and Max Verstappen. With all four of them, it is as if the lights had suddenly been turned on in a dark room. From the very first race with us, Michael asked the engineers probing questions, which were more demands than requests. They were already under a lot of pressure back then. They were not used to that.”

Jordan continues: “I think Lewis had a harder time getting his titles. Michael never had a teammate to race against him. First Eddie Irvine played his helper at Ferrari, then Rubens Barrichello. Lewis always had to beat his teammate first, never had a free ride from the team. This already started in his first season at McLaren in 2007 with Fernando Alonso.”

Jordan is therefore convinced: “With the concessions Michael always had, Lewis would definitely have seven titles and 100 GP wins already. Because in 2016, with an unfaltering number 1 status à la Michael, he would never have lost the World Championship to Nico Rosberg. And neither would the races that Rosberg was allowed to win against him.

One who puts both on the same level is the current Formula 1 sports director Ross Brawn. As Ferrari’s technical director, the Briton won five driver titles with Schumacher, and as Mercedes team boss in 2012 he was the driving force that lured Hamilton to the Silver Arrows. Brawn on F1-Insider.com: “Michael always wanted to work with the engineers, find solutions, was always extremely motivated. Especially his first lap after the start was unique. He always worked perfectly like clockwork. Michael was a very ambitious person and an extreme fighter. He did not win his seven world championship titles because he gave up quickly. He also had a unique way of driving the people in the factory”.

Hamilton is completely different in type. Brawn: “Lewis is someone who can take people’s breath away. I used to have a conservative view of the life a champion had to lead off the track. Lewis taught me better. He loves to travel the world and go to pop and fashion events. I admire his strength to do his thing like that and be successful. For Formula 1 it is extremely important that he is the same. He will continue to be the yardstick that has to be crossed in the future. But both Michael and Lewis are unique in their own way.

But: Hamilton himself doesn’t give much thought to the hunt for Michael Schumacher’s records. “For me it’s almost surreal,” the Briton says. “I used to watch Ayrton Senna and Michael Schumacher on television. Now I’m suddenly the guy that people see. When I lie on the sofa at home in winter with my dogs, then perhaps I will become aware of what I have already achieved today.

Hamilton vs. Schumi: He already has these records, he is still chasing them

World championship title: Michael Schumacher is standing at seven, Lewis Hamilton now has six. In 2020, the Briton could be on a par with the German.

Victories: Schumacher won 91 races, 91 now also Lewis Hamilton. But Hamilton is also clearly ahead of Schumacher when it comes to the win rate. There it is 34.62 percent to 29.64 percent per Hamilton.

Winning years in a row: When Michael Schumacher won the 1992 Belgian GP in Benetton-Ford, he put on an impressive series: Until 2006, 15 years in a row, he always won at least one Grand Prix. Hamilton stands at 14 victorious years in a row – winning in each of his F1 years so far! This is unique in the history of Formula 1.

Victories at a Grand Prix: Michael Schumacher cheered eight times in France. Lewis Hamilton achieved this in 2020 with his eighth victory in Hungary.

Pole Positions: Hamilton has also long been ahead in the pole position: 96:68 for the 35-year-old.

Fastest race laps: Michael Schumacher set the fastest lap 77 times, Hamilton 51 times. Today, this is much more difficult because the fastest lap is often taken by the driver who last changes to fresh tires.

Points: Because significantly more points have been awarded since 2010 than in the past, Hamilton has also long since achieved the all-time points record. The score is 3661:1566 per Hamilton.

Race in the points: Michael Schumacher scored points in 221 of his 302 races and Hamilton in 224 of his 261 Grands Prix.

Podium finishes: With 160:155 Hamilton also leads in the podium places.

Grands Prix with lead laps: Lewis Hamilton has already snatched this record in 2019: He led in 158 races for at least one lap, Michael Schumacher comes in 142 races with leading kilometers.

World Championship race: With 307 races, Schumacher is only fourth in the leaderboard (leader Kimi Raikkonen with 323). Hamilton stands at 261 races.