Does Red Bull bring back Vettel? 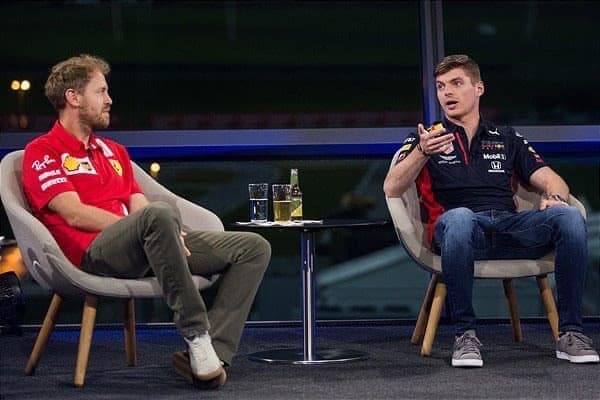 Formula 1 star Sebastian Vettel is still without a cockpit for 2021. After his appearance on Servus TV, Red Bull Racing has become the focus of speculation. There is nothing to announce yet.

He was back to his old self on “Sport & Talk”, the show of the Red Bull house channel Servus TV. Sebastian Vettel (33) visibly enjoyed the familiar surroundings and the red carpet that his ex-team had rolled out for him.

Even the last observer should have realized during the show: Deep inside, the German wants a comeback with his ex-team, with whom he won the World Championship four times in a row.

Even more so after Daimler board member Ola Kaellenius refused him in Spielberg: “I understand that this is a very exciting thought – especially for the German fans. But with Lewis and Valtteri we have two top drivers who perform at the highest level”, Källenius told RTL abot Vettel joining Mercedes. “We stand by our two drivers that we have now.”

READ MORE: HOW REALISTIC IS A DRIVER SWAP WITH SAINZ?

This makes Red Bull the last remaining top team that still has a cockpit to give away. But what are the pros and cons of the German switching to his old successful team?

One thing is certain: With the two V’s, Verstappen and Vettel, Red Bull would have won from a marketing perspective alone. The return of the prodigal son would be a true PR fairytale. And with an experienced superstar like Vettel at the wheel of the Red Bull, the chances of an attack on Mercedes in 2021 are also increasing. The German is still considered an excellent car developer. Red Bull and its chief designer Adrian Newey know this better than any other team. Former teammate Mark Webber remembers: “Seb was brilliant in terms of the set-up in terms of tyres and engine.

On top of that, Verstappen doesn’t defend himself against Vettel as a teammate. “I wouldn’t have a problem with him,” says the Red Bull shooting star. On the contrary: If the Dutchman could beat the four-time champion, it would be better for his reputation than a triumph over Alex Albon (24). Anything less than a won team duel against the Thai would be a disappointment in the Verstappen camp anyway.

But: Exactly that Alex Albon could ruin the Vettel comeback fairytale. Background: In 2019, at the request of the majority shareholders of Red Bull, the Briton with Thai roots was first signed by Toro Rosso and then promoted to the Red Bull. 51 percent of the shares still belong to the Thai family that once invented the energy drink in South East Asia. If Albon does not fail completely in 2020, a contract extension is already the logical scenario for him.

It also means: Red Bull boss Dietrich Mateschitz and his motorsport advisor Helmut Marko still believe a lot in their quadruple champion and would in general terms not stand in the way of a comeback in the blue race suit – that is an open secret according to information from F1-Insider.com.

However, as of now, Vettel is still without a cockpit for 2021. He will have to wait and perform in the difficult to drive Ferrari, to recommend himself for the seat next to Max Verstappen.