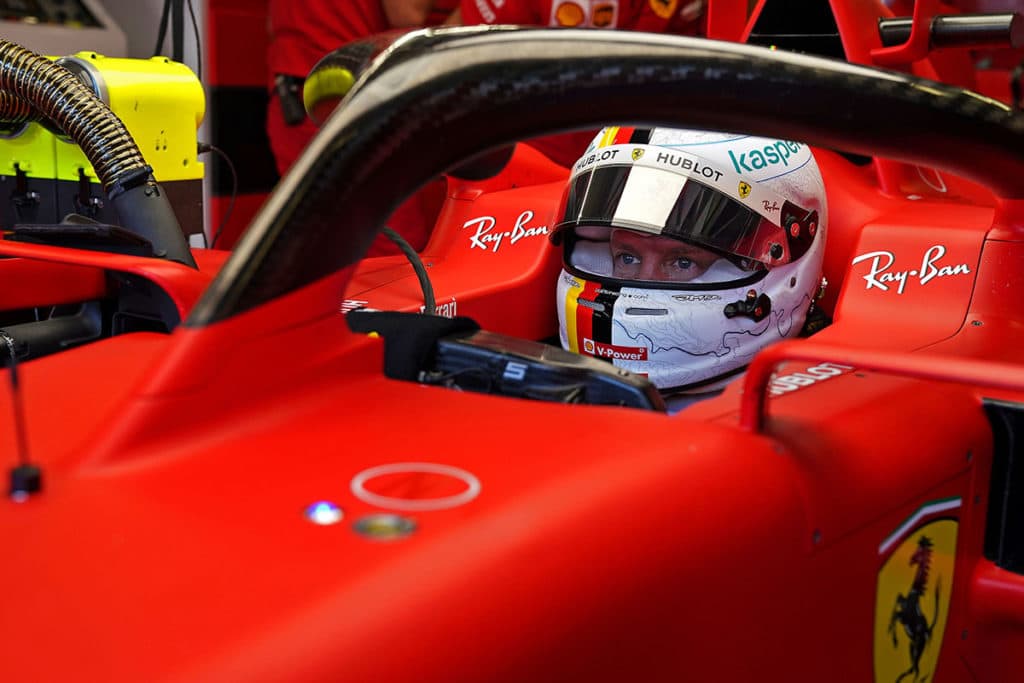 Sebastian Vettel beats his teammate in qualifying for the Austrian GP. But the Ferrari remains weak

Even though he only finished tenth in the end, it was like a small victory for Sebastian Vettel (33). In the Ferrari internal duel, the German threw his team colleague Charles Leclerc in qualifying for the Styrian Grand Prix out of the third qualifying round (11th place).

Nevertheless, the bitter realisation remains: As we say in Germany, there is no flower pot to be won with the Ferrari SF1000. Vettel and Leclerc had already used up all the rain-tyre sets by the end of the second qualifying section.

The man from Heppenheim explains: “It was actually a lot of fun, but it took an incredibly long time for the tyres to start working. Overall, we weren’t fast enough, we had a lot of aquaplaning.” But the German is already looking ahead again. “Tomorrow is another day. I think we should be pretty good in race trim. The car felt much better on Friday with the new parts (underbody and front wing; editor) than last week and I hope it stays that way. The rest will show then.

RTL expert Christian Danner defends the Ferrari stars: “The drivers are both top. “That’s all you can do with this car.”

Ralf Schumacher adds at Sky: “It was very important for Seb to beat Leclerc with an undriveable car in these conditions. But the fact that both Ferraris were so bad even in the rain shows: Something must be wrong with the mechanical set-up as well. If I were Binotto, I wouldn’t want to get a call from my boss today.”

Vettel’s farewell tour – even outside the red racecar, it is still flanked by misunderstandings. A statement by Sky expert Martin Brundle circulated on the Internet on Saturday morning, according to which Vettel had asked him for an interview in the run-up to the Hungarian Grand Prix. The German allegedly explained his reasons to the former F1 driver and current expert with having something to say. The rumour quickly spread that Vettel would be announcing his retirement on Thursday on Sky England.

“Not true,” the still Ferrari star confirms to F1-Insider.com and explains the background: “Actually, an interview with Sky was planned in Austria. We had to postpone this to Hungary in favour of the ORF. That’s what the interview with Brundle was about and nothing else. It was a little bit exaggerated.” Vettel admitted that there was nothing unusual about an interview with Sky in general. “Because there are no print journalists in the paddock at the moment,” he said, “we’re only doing TV interviews.”

A statement by Renault ambassador Alain Prost also caused astonishment. According to the French, Fernando Alonso was chosen instead of Sebastian Vettel because Vettel’s drive and motivation were not quite clear. According to F1-Insider.com information, this is only logical. Vettel has clearly decided to switch to a winning team, preferably Red Bull, and has only had loose talks with Renault.

For Toro Rosso team boss Franz Tost, the final word has not yet been spoken in the flirt between Vettel and Red Bull. He says to F1-Insider.com: “I would wait and see how the season goes. When a four-time world champion is recommending himself, there’s no way a top team can ignore him.”

So the question remains, can Vettel recommend himself in the Ferrari? On Friday, the power disadvantage of the SF1000 was again obvious. What speaks for the German: teammate Leclerc is considered a boy wonder. Nevertheless, Vettel beat him in the rain under the most difficult conditions.

By: Ralf Bach and Bianca Garloff