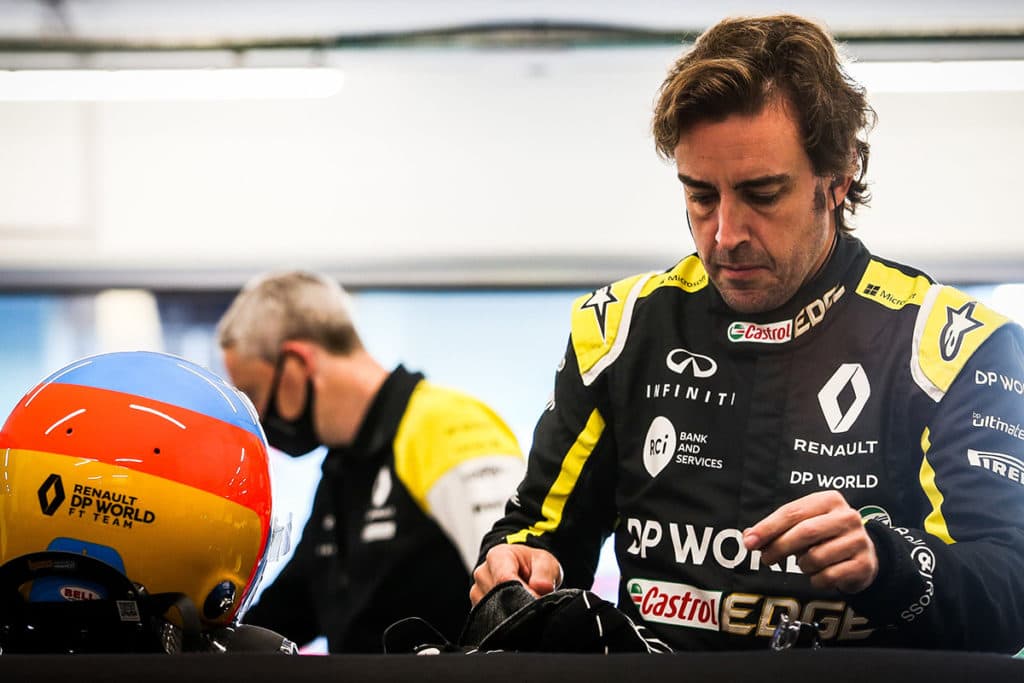 Fernando Alonso Credit: Renault
Fernando Alonso is not the first racing driver to have an accident outside a race track. This is how dangerous motorsport drivers live on bikes and co.
Bianca Garloff | 13. February 2021 , 15:00 Uhr

Fernando Alonso is not the first racing driver to have an accident outside a race track. This is how dangerous motorsport drivers live on bikes and co.

“Motorsport is dangerous.” That’s what it says on every ticket and other passes when attending Formula 1 races. But not only the recent bicycle accident of Formula 1 superstar Fernando Alonso (39) on Thursday shows: Formula 1 drivers often live more dangerous lives away from the race tracks and cockpits, as history has already shown more than once.

Alonso injured himself during bicycle training in Switzerland when he collided with a car in the vicinity of his residence in Lugano. The Spaniard suffered a broken jaw and has already undergone surgery. According to information from his Alpine Renault team, the two-time world champion will be able to leave hospital again shortly. Testing for the Formula 1 season in Bahrain in four weeks time is not endangered.

But Alonso is not the first Formula 1 star to be injured during preparation.

Nick Heidfeld had to take a break

In 2005, Nick Heidfeld was the victim. The German, then under contract to BMW-Williams, collided with a motorbike while training on his bicycle in Switzerland and was still lucky: He “only” suffered a cracked right shoulder blade, a sprained finger and several abrasions, but had to end the season prematurely nevertheless.

Red Bull driver Mark Webber crashed heavily on his racing bike at a charity event in Tasmania in November 2008. The Australian collided head-on with a car and was flown to hospital by helicopter. Webber suffered a broken leg in the accident. At least that’s what he communicated to his team. Later it turned out that he had also suffered a compound fracture of the collarbone, which could have affected his driving more than the broken leg. He concealed this injury from the team – for fear of losing his cockpit. However, Webber was fit again for the season opener in his home country Australia.

In 2016, Sauber driver Marcus Ericsson was fortunate when during fitness training in Thailand, he tried to avoid a chicken on his bike at top speed and crashed. “I was lucky to get away with bruises and scratches only,” the Swede said later. The chicken remained unharmed. The Swede was able to take part in the next race in Malaysia.

But not only racing drivers are at risk on two wheels. In 2014, Mercedes team boss Toto Wolff crashed heavily on his bike when he was involved in a mass collision of his team during a bike ride in Vienna. Wolff broke a shoulder, collarbone, elbow and wrist. As a driver, he would have had to take a break for several races. He was nevertheless able to guide the fortunes of his racing team at the following race in Budapest, heavily bandaged. “We decided to leave it to the professionals now. Lewis and Nico are better wheel to wheel at 300 km/h than we are at 30 km/h!”, Wolff tweeted one day after the accident.

By the way: Not only cycling is dangerous for the racing pros. Nothing more needs to be said about Michael Schumacher’s fateful skiing accident in the French Alps in December 2013.

Not so well known on the other hand is the fate of Juan-Pablo Montoya. The Colombian had just switched from BMW-Williams to McLaren-Mercedes in 2005 and was considered one of the big challengers of Michael Schumacher in the Ferrari. He broke his shoulder during tennis training before the season. At least that’s how the Colombian communicated it. Later it came out that he had crashed a motocross bike. According to his contract, however, he was not allowed to ride a motorbike – hence the “white lie”.

The “tennis accident” cost him his career. Not only did he have to sit out the first two races of the season, the fracture turned out to be so complicated that Montoya’s driving was impaired for the whole year and he could no longer perform at his usual level. In 2006, unnerved, he switched to the NASCAR series.

Niki Lauda also had his experiences with accidents that had nothing to do with racing cars. In 1976, he turned over his tractor while doing agricultural work at his country house in Hof near Salzburg. Lauda once revealed: “It was a huge stroke of luck that I survived. I had serial rib fractures and the problem of having to get fit again quickly for the Spanish Grand Prix. With the help of Willi Dungl, the fitness pope at the time, I succeeded. Within 14 days he got me so fit with injections and his remedies that I finished second with broken ribs. From then on we worked together.”

Frenchman Patrick Depailler was a passionate hang glider pilot. In 1979 he crashed and suffered several broken bones from which he had difficulties to recover. He moved from Ligier to the Alfa-Romeo works team in 1980, only to succumb to a fatal accident during testing at Hockenheim on 1st of August the same year.

His compatriot Didier Pironi lost his life in a speedboat race in 1987. The Frenchman wanted to continue his passion for speed with speedboats. After a serious accident with a Ferrari during the rainy Friday practice at Hockenheim in 1982, this was no longer possible for him in motor racing anymore. Pironi, who came to Germany for the race as world championship leader, crashed into the rear of Alain Prost’s Renault at top speed. The Ferrari soared high into the air and broke into several pieces on impact. Pironi suffered over 20 fractures, some of them highly complicated, in his feet and legs. His Formula 1 career was over.

The British world champion of 1958, Mike Hawthorn, became a victim of a “Mercedes” phobia. All his life he had created an enemy image of the “Silver Arrows” for himself. In 1955, the brutal duel with Mercedes culminated in Jaguar driver Hawthorn being the cause of the fateful collision at Le Mans, which cost the lives of 82 spectators and French Mercedes driver Pierre Levegh.

Hawthorn was being chased by Mercedes star Juan-Manuel Fangio. He did not want to lose any time when turning into the pits and braked his Jaguar sharply without warning. Levegh, who was already lapped, was unable to avoid him and flew into the packed grandstand. The Mercedes exploded, its parts becoming projectiles. Hawthorn won the  world championship in 1958, but retired afterwards, seriously ill with kidney disease.

On the evening of 22nd of  January 1959, in heavy rain, he ran into a Mercedes 300 SL on a country road in his Jaguar and overtook it spontaneously.  While overtaking he recognised an acquaintance in the driver, the Scottish racing team owner Rob Walker, whom he challenged to a race. In the process, Hawthorn’s Jaguar crashed into an oak tree and the Briton died from his severe head injuries.

Motorsport is dangerous, but driving fast outside a race track is often even more so…