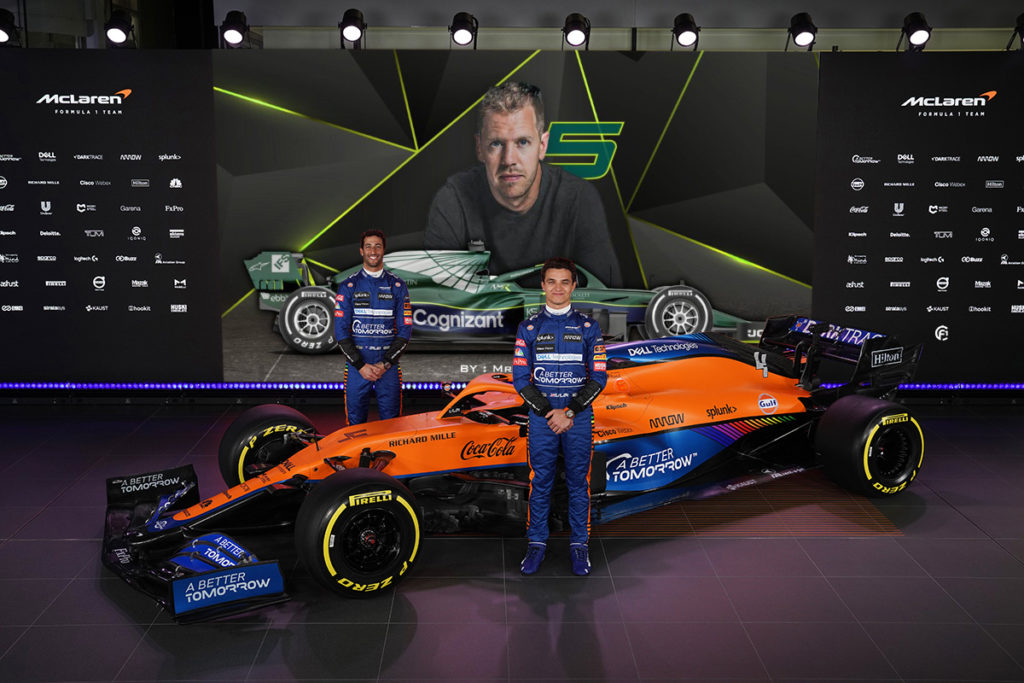 McLaren versus Aston Martin - this will be one of the most exiting fights of the year. Zak Brown expects Vettel to be a tough opponent
Bianca Garloff | 19. February 2021 , 17:15 Uhr

McLaren versus Aston Martin –  this will be one of the most exiting fights of the year. Zak Brown expects Vettel to be a tough opponent

It might be the most exciting duel behind the fight between Mercedes and Red Bull for the world championship title: McLaren-Mercedes against Aston Martin-Mercedes! Not only is this a battle between two Mercedes customer teams. The constellation of two German top performers is also explosive. Sebastian Vettel (33) wants to bring Aston Martin forward as a leading driver, Andreas Seidl wants to take the next step back to the top of Formula 1 as team principal with McLaren.

McLaren managing director Zak Brown also believes that the two buddies will meet as opponents. During the McLaren presentation, the US-American said: “Given the car they (Aston Martin) have – they have the fastest car next to Mercedes – they will be hard to beat.”

Brown is referring to the extremely close cooperation between Aston Martin and Mercedes. The British sports car manufacturer’s team not only gets its powertrain from Mercedes High Performance Powertrains in Brixworth, but also receives other parts such as the rear axle, gearbox and front suspension from Brackley. In 2020, Aston’s predecessor team Racing Point took this cooperation to the extreme, copying almost the entire previous year’s Mercedes – including bodywork and aerodynamics. This is no longer permitted. Nevertheless, the new Vettel team is still allowed to use the aforementioned 2020 Mercedes parts in 2021. This corresponds to an update without Aston Martin having to spend development tokens on it.

It also means that they can concentrate on other areas in the evolution of the car. Accordingly, team principal Otmar Szafnauer had already revealed that Vettel will get a car that is going to reuse less than 70 per cent of the parts from last year. “We have a new undertray, new bodyworks, a new engine cover, a new chassis and new wings,” the US-American stated.

And they just have Vettel behind  the wheel. Zak Brown: “Sebastian is a four-time world champion and even if he didn’t have a great year last year, I’m sure he’ll give his best again and be highly motivated.”

The pundits  are also looking forward to the McLaren versus Aston Martin fight. “I have great confidence in both of them,” Ralf Schumacher told F1-Insider.com. “McLaren made the right step with the Mercedes engines. Aston Martin made the right move to bring Sebastian Vettel in, who now has to prove that he was sold short at Ferrari the last few years.”

But he also rates the German team principal component highly at McLaren. “Andreas Seidl is for me one of the best technical managers in Formula 1. I think a lot of him. It will be exciting to watch who will be more important for the team – Vettel or Seidl.”

McLaren on the road back to the top

Former team boss Eddie Jordan also sees McLaren on the road back to the front. “McLaren will return to their old strength in the future,” he told F1-Insider.com. “I think their big time will come in 2022. Vettel absolutely has to perform this year and beat Stroll. Lance can be very quick but he has lacked consistency so far. Driver-wise, McLaren is better equipped. Ricciardo is one of the best and Norris is a super talent.”