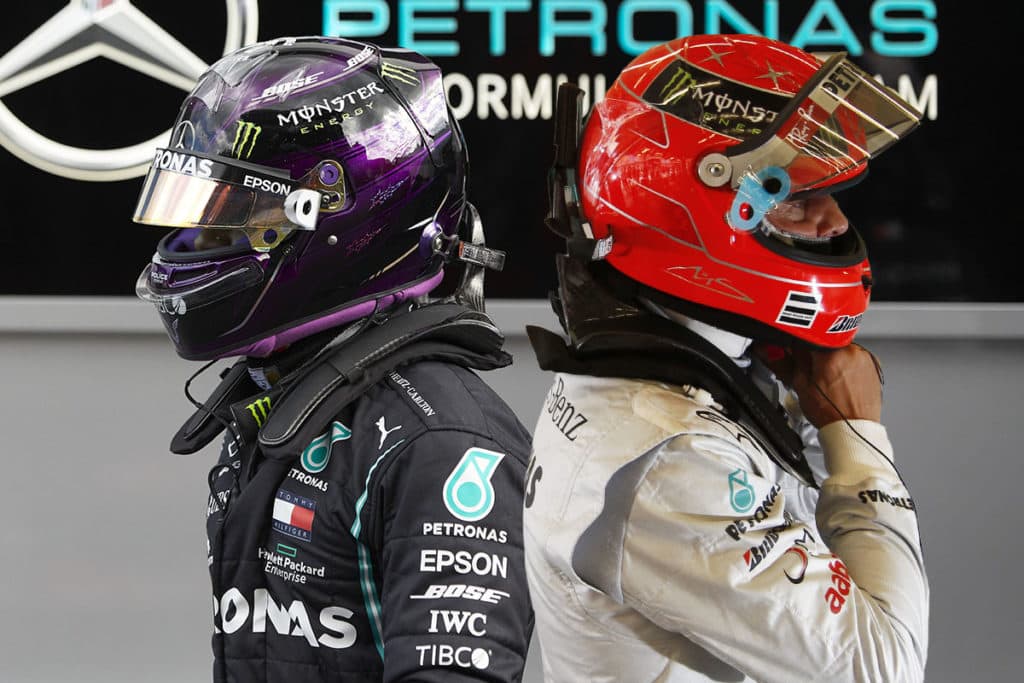 Norbert Haug has worked with both Michael Schumacher and Lewis Hamilton as head of Mercedes motorsport. In an interview he talks about what makes the two champions

Norbert Haug, Lewis Hamilton now has seven world championship titles like Michael Schumacher. Would you ever have thought that possible?
Norbert Haug: My answer has two parts. Part one: After Michael’s seventh World Championship title, I would have bet my house and home on him setting a record for eternity. Part two: Ever since Lewis started collecting titles on an annual basis with Mercedes, it was clear that at some point the number “seven” would be due. It could also become a ten, and then it would be as well-deserved as all the previous seven.

How proud are you to have accompanied both drivers in their careers?
Of course I’m very pleased, especially that I got to know Michael like Lewis in their early days of motorsport when they were not yet professional athletes and then worked with both of them for so long. With Michael at the beginning of his professional career in the Mercedes junior team and in the final phase of his career for three years in the current Mercedes works team. In between, we were rivals in Formula 1 in red and silver for twelve years and have always remained friends. Tough – sometimes very, very, tough – was how it was on the track, sensitive and emphatic before and after the races. I have been working with Lewis for 15 years – from his karting days to Formula 3 in the DTM, GP 2 and Formula 1, his first victory there and his first World Championship title in 2008. Looking back, I am of course delighted that I was involved in Lewis’ first victory in 2007 at the Canadian GP as well as in the first victory of the current Mercedes Formula 1 factory team in 2012 at the Chinese GP. Since then, the Silver Arrow team’s wins have reached triple digits and Lewis is on the verge of reaching triple digits. Unimaginable and not to be overestimated.

What parallels do you see between the two?
Both love what they do, both challenge themselves more than anyone else, both always go the extra mile, both never give up, both are positively dissatisfied. What sounds like a contradiction is the elixir of the super champion. Without it you can become a winner, but not a permanent winner.

And what are the differences, or rather, what has made both of them special, independently of each other?
You can climb a mountain peak from several sides, but the mountaineer’s abilities must be very similar or at least very comparable – otherwise he will fall. Michael and Lewis have the piercing gaze of wanting, they ask more, do more, work more, create more. These qualities are present regardless of the type-specific habitus. Both are the very special ones among the special ones.

You got to know both at a young age: What was young Schumi like and what was young Lewis like?
The young Schumi – you can still see and hear it today in old film excerpts – was a young man from the Rhineland with a dialect, a boy from the kart track. A short time later he spoke English, and so perfectly that an English journalist told me: “I wish our English drivers spoke as well as your German one.” This shows the perfectionist: Goodbye karting track, without pure English I don’t make any headway in the highest motorsport class, that’s the basic requirement to make progress. The young Lewis was very well behaved and very polite. At the age of 14 he was already a guest at Mika Häkkinen’s first world championship party in 1998 in the Mercedes Museum. All his victories in Formula 3 and Formula 1 have been won by Lewis with Mercedes engines ever since. From apprentice, or pen, as they say in Swabia, to multiple world champion – in Hollywood you would probably label the story as exaggerated fiction, in reality it takes place.

How was Schumacher as your opponent in the Ferrari?
Merciless. If you want an opponent, his name is not Michael Schumacher. If you wish for a driver, that’s his name.

Schumacher apparently had to fight harder for his successes, Hamilton only rarely had to do any development work: How do you rate this thesis?
If you look it up, you can read: “Thesis means an assertion to be proven”. I know of no one who can provide this proof. Certainly, there will be a completely different amount of data in 2020 than in 2004, but also the increased possibility of getting lost in the data jungle. Having Michael and Lewis at the peak of their performance as team mates and coordinating them would have been the ultimate combination with the greatest chances of winning, assuming a car capable of winning. But probably also the one that would have driven the responsible person to the brink of madness – or beyond.

Who is the better of the two or the best for you?
Who is serious will not be able to give you an accurate answer.

How important was Schumacher in building the Mercedes team and thus as a pioneer for Hamilton’s successes?
I am sure he was very important. With Ross Brawn as the technical head, he won all of his 91 victories and all of his seven World Championship titles. With Ross, the basic structure of the Silberpfeil works team was put in place in 2010, with many colleagues and technicians who are still active in the team ten years later and still play key roles. Back then, after the financial crisis, we had a very minimal budget and not a third of the current number of employees. But without an idea, a vision and a goal-oriented beginning, there can be no fruitful continuation. Our first victory in China in 2012 was won by Nico Rosberg, and Michael was also absolutely capable of winning until his retirement after an incorrectly fitted wheel nut. Afterwards he drove the not best car in the field best time in the qualifying for the GP Monaco – on the mother of all race tracks.

Again and again it is said that Schumacher even had to give way for Hamilton: Was the resignation really forced?
No, it wasn’t, and anyone who looks will see that Michael was shortly before his 44th birthday when he resigned. Which does not mean that he was no longer capable of winning in 2013, 2014 and 2015, and could even have been a World Cup title. As I said before: If you drive the pole time in Monaco in 2012, you can win in 2014 with a car that is capable of winning, and with a superior one even more so. Everything here was geared towards the hybrid engine age, which – because the competition hadn’t finished – started in 2014 instead of 2013. And, as you know, Mercedes has won all the Formula 1 World Championship titles since 2014, seven times in a row for drivers and constructors. An unimaginable and in the history of the Formula 1 World Championship unique achievement, which speaks for the team, drivers, crew and team management: a straight 1 with seven double stars.

Nico Rosberg beat both of them in the same car: what does that tell you?
He would have preferred to keep driving… Seriously: Nico knew exactly why he was drawing a line under his Formula 1 and racing career in 2016, and he communicated this at length. And I can absolutely understand and respect his decision: There are more important things in life than driving around in circles. But there are few things more beautiful, more challenging and more instructive.