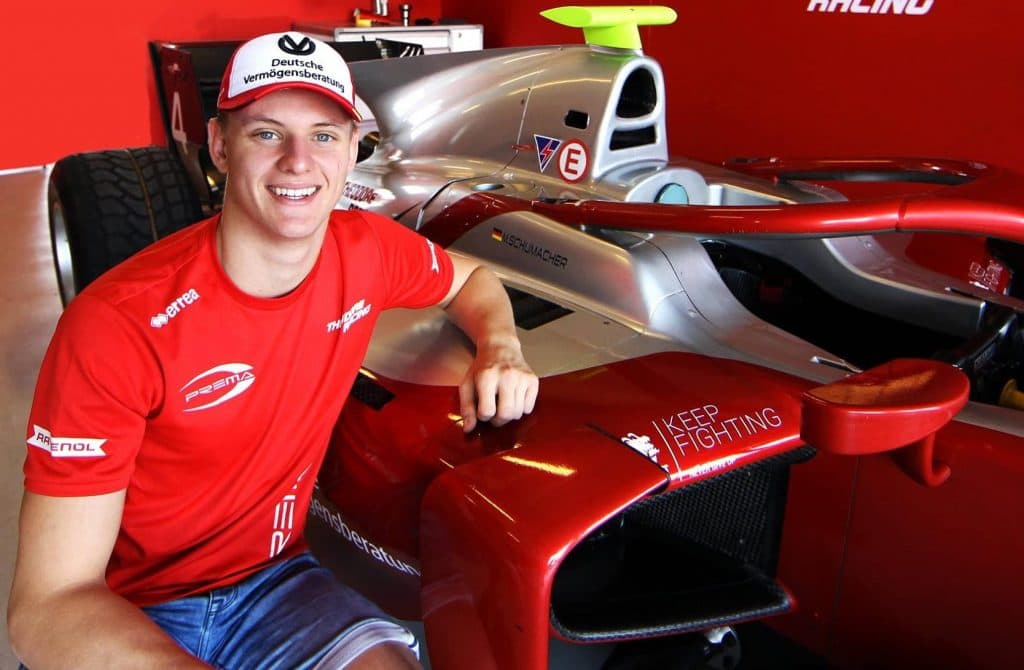 Mick Schumacher: The Next Generation

+++25. March 2019: Mick Schumacher will not only test for Alfa Romeo in Bahrain, but also for Ferrari. After twelve years, a “Schumi” will finally be sitting in a Ferrari car again.

In 2009, Michael Schumacher climbed into a Ferrari for the last time as part of a testing program. Well, ten years later his son Mick Schumacher takes over. Only a few days ago, ABMS & F1 Insider revealed in an exclusive news report that the German Junior pilot will test drive an F1 Alfa Romeo in Bahrain. Now we can also confirm reports from “Autosport”, that Schumi junior will also test a Ferrari on the Bahrain tracks!

+++24. March 2019: As ABMS and the F1 Insider learned, Mick Schumacher drives the Alfa Romeo at the Young Driver Tests in Bahrain. There were rumors since the beginning of the year; now it is clear. According to information that ABMS and the F1 Insider received, Mick Schumacher rides the Alfa Romeo Ferrari as part of “Young Driver Tests” on Tuesday and Wednesday (02/03 April) after the Bahrain Grand Prix. An official confirmation is still pending, but “Schumi Junior” will be on site anyway for his first race in Formula 2 (620 hp) as part of the F1 Grand Prix program.

+++10. February 2019: “Our hearts were always red”, according to Mick Schumacher in an interview with F1 Journalist Jennie Gow. “And our hearts will always remain red.” With that statement the son of F1 legend Michael Schumacher clarifies his decision to join the Ferrari-Junior Programme.

He also reveals that he grilled Sebastian Vettel for more tips: “He has enormous experience in F1 and it’s always fantastic to talk with him not only about F1 but also about Formula 2 and how to manage a racing weekend.”

Most recently, Mick trained at the South Garda Karting tracks for the new season.

In addition, Mick visited a special exhibition about his father, Michael Schumacher, at a Ferrari Museum in Maranello.

+++January 25, 2019:
Ferrari turns more and more German. After Sebastian Vettel and Pascal Wehrlein, now Mick Schumacher (19) who will join as a junior driver for the Scuderia. The son of F1 champion Michael Schumacher – now in the red car of legends. This, of course, is something very special for any Ferrari and Schumacher fan. The question remains, is this step too early for Mick Schumacher? Does this increase the pressure instead of managing it?

Hans-Joachim Stuck (68) is known for his blunt statements, and in an interview with F1 Insider reporter, former F1 pilot and Le-Man winner doesn’t hold back this time either.  Stuck about Mick Schumacher:

“I’m thrilled about this boy. To see him join the Ferrari junior program is clearly a step forward and one at the right time. There is no increased pressure because the pressure has always been there anyway, and so far Mick has mastered it brilliantly.

“Slowly but surely I am convinced that this could be it – another Schumacher in Formula 1! It would be fantastic for German motorsports.”

Stuck is sure that Schumi junior will also be successful in Formula 2 which is part of the F1 official race program. There, Mick will be competing with the Prema team this season gaining important race weekend experience within the F1 program.

Stuck continues: “So far, Mick has mastered all racing series and he will withstand the pressure of increased expectations in Formula 2 as well. Even if he might have a bad day once a while, he knows what to do and how to deal with it. He has already proven it in Formula 3. I am convinced he will succeed.”

It’s clear, to be part of Ferrari’s junior program, to test the car, to work together with F1 race engineers and also to learn from Sebastian Vettel directly is an enormous opportunity for Mick.

Ferrari’s junior program has always been the stepping stone to Ferrari’s elite team of motorsports. It has always brought up young talents up the ranks to finally land a job in Formula 1. Charles Leclerc and Antonio Giovinazzi are proof of it.

Leclerc drives for Ferrari this season and Giovinazzi will race for Alfa Romeo. No Mercedes Junior pilot has ever achieved the same, to make that final step into an F1 Silver Arrow.